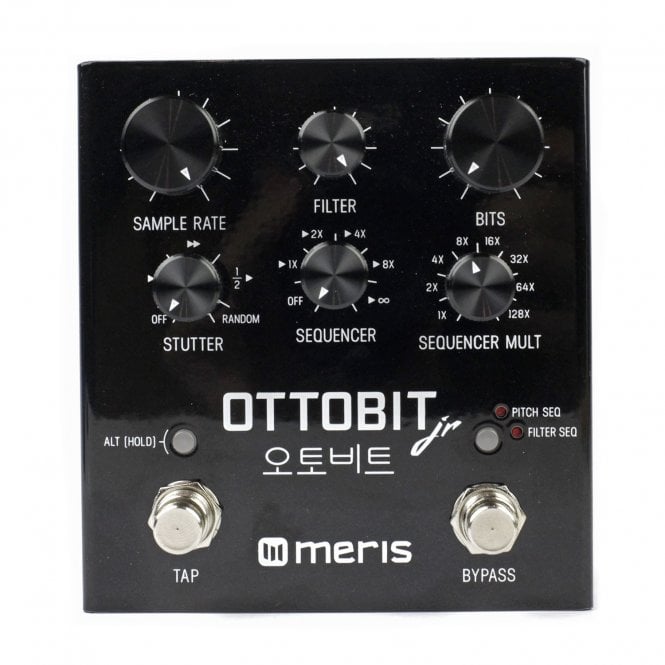 From an era when visiting the arcade meant silicon-defined-sonics were burned into so many kids’ memories (big and small alike), the Meris Ottobit Jr. is inspired by the world of vintage gaming consoles, bringing those sounds directly to your pedalboard.

So what exactly is Ottobit Jr.? Well, it’s a bitcrusher, but it would be an insult to just call it that. It’s also an ultra-musical sequencer, stutter and filter effect, but it’s not JUST that either. It’s the sum of all of these parts that make the Ottobit Jr. what it is: a maniacal side-scrolling, coin-collecting, power-glove-punching-machine with a host of earth-shattering sounds that’ll melt your face right off! Heck, the pedal is so unique and innovative that it deserves to have a verb all of its own. So plug in, press play and Ottobit away!

Ottobit Jr. takes everything that made the original Meris Ottobit 500-series unit such an innovative studio tool and crams it down into a rugged and roadworthy pedal suited for any rig, be it guitar, bass or synth. Basically, if you have a creative bone in your body and you love designing crazy and unique sounds unlike anything else, then the Ottobit Jr is for you!

Ottobit Jr. sports a fuzzy bitcrusher with variable sample rate, triggered stutter effects, a multi-mode sequencer module and a mindblowing low-pass filter that sounds just as good as any analog synth filter out there. All of this is syncable and controllable via tap-tempo, expression and/or midi. But most important of all, Ottobit Jr. always stays super reactive to your playing, seeing you jump from fiery fuzz tones to classic arcade bleeps and bloops, only to end up in a barrage of 6-step sequencing and glitchy stutter effects without breaking a sweat and without ever sounding unmusical.