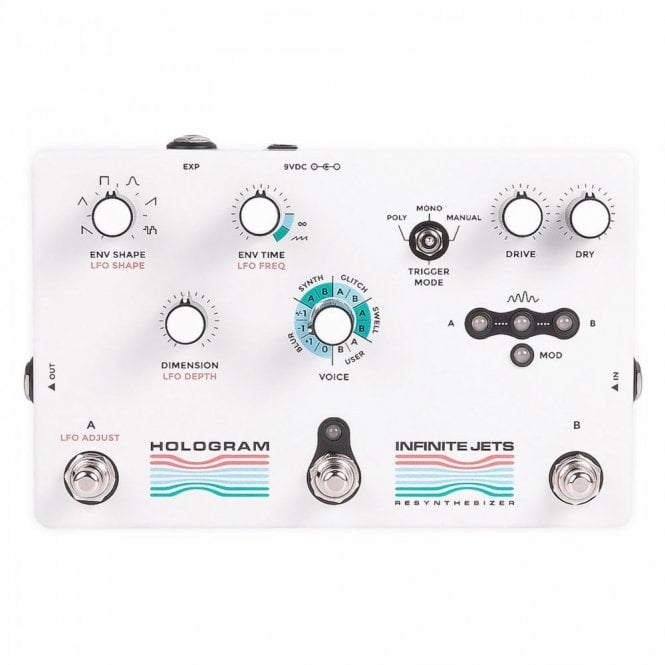 A SUITE OF EXPRESSIVE EFFECTS TO TRANSFORM YOUR INSTRUMENT IN NEW AND EXCITING WAYS.

Infinite Jets tracks the dynamics of your playing, samples individual notes and chords, and then reinterprets them as new sounds using two independent channels of infinite sustain. It offers 4 separate sampling effects in one: Blur, Synth, Glitch, and Swell. Create lush ambient textures that seamlessly fade from one chord to the next, infinite sustain, glitching granular loops, filtered synthesizer sounds, violin-like fuzz and swell effects, drones, distorted delay and vibrato, and much more.

The pedal uses two channels of sampling (A & B) to sustain notes indefinitely. They can be triggered by your playing automatically or via footswitches. Because there are two channels of sampling, notes can attack, sustain, and decay on top of each other. This allows for unique harmony, drone, and textural effects. Any note or chord can be sustained indefinitely and assigned a wave shape and decay time via the Shapeand Envelope Time controls.

Mono - In Mono Trigger Mode, only one channel can sustain at the same time. Notes are triggered by your playing.

Poly - In Poly Trigger Mode, both channels can sustain at the same time, allowing notes to overlap. Notes are triggered by your playing.

Manual - In Manual Trigger Mode, either channel can be triggered independently via the A & B footswitches. It can be set to Toggle, Latching, or Momentary operation.

Blur - These presets “freeze” the frequencies of your note or chord, but remove the original attack and decay characteristics, allowing the sample to be reshaped into a new sound. The Blur presets are useful for creating hazy, atmospheric textures, pads underneath lead playing, and many other unique effects. Besides the standard voicing, +1 Octave, -1 Octave, and +/- 1 Octave variations are included. When using Blur presets, the Dimension knob controls a combination of delay time, filtering, and feedback that drastically changes the perceived “size” and “space” of the sound. Automating this control can create pitch bends, chorus, and vibrato sounds.

Synth - These presets sample your sound and convert it into one of two different synth sounds using Hologram’s proprietary DSP algorithms. When using the Synth A and B presets, the Dimension knob controls the low pass filter’s cutoff frequency. The filter can be automated with recorded knob movements or controlled by the internal LFO or envelope. Synth A transforms your playing into a hard edged digital synthesizer sound, while Synth B transforms your signal into an airy, gently chorused synthesizer sound reminiscient of 1980s synth pads.

Glitch - These presets chop the incoming signal into looping fragments and reassemble them in two distinctly different ways: Glitch A splits the incoming signal into four fixed looping chunks of audio in a predictable way. The Dimension knob chooses one of the four sample lengths to play back when in Glitch A mode. Glitch B adds a random element by storing notes or chords in one of six separate fragments of audio and playing them back at random (or controlled) intervals. In this mode the Dimension control can be used to scroll back through the six notes stored in the pedal’s memory. Automating this control allows for real time remixing of audio into new patterns— while the control is automated it sweeps through the different sample blocks of pre recorded audio and plays them back. Any new notes played while the control is automated will overwrite the existing material in the sample blocks. In this way the pattern can continually evolve as notes are added and subtracted.

Swell - These presets allow for the use of Infinite Jets’ dynamics processing to add dramatic volume effects to your playing. With Swell A you can create volume swells or repeat the waveform to create tremolo effects. The effected signal is then fed into a delay (controlled by the Dimension knob) which can be modulated by LFO, envelope, or recorded knob movement. Automating this control can create a wide range of sounds from subtle tape warble, chorus, or vibrato to extreme pitch shifting feedback sounds. Swell B performs the same function as Swell A and adds waveshaping to the signal, allowing for violin-like sustained fuzz effects and over the top distorted lead tones.