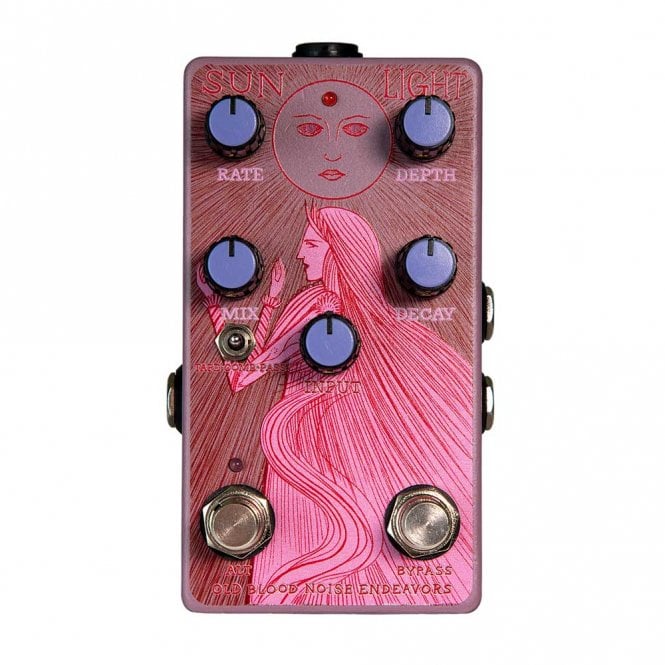 Dynamics. It’s the shifting ebb and flow of the tide. It’s the ups and downs of life. It’s witnessing night turn into day, as the sun attacks and sustains through the nightly veil, making the darkness release its gloomy grasp and decay. It’s where you’ll find the Old Blood Noise Endeavors Sunlight Dynamic Freeze Reverb. An envelope triggered multi-mode reverb with the ability to dynamically freeze and sustain your notes forever, seeing you create truly mesmerising sunlit soundscapes.

• Rate and Depth controls specific to each mode

• Alt footswitch to quickly snap to a particular knob setting

Building on what made OBNE’s top-selling Dark Star such a stellar early-chain pad reverb, Sunlight twists it into the other dimension as a reverb pedal centred around the idea of a dynamic hold. When you play, your new notes are let through and old notes are allowed to fade away, but when you stop playing, old notes have the chance to repeat forever.

A dead simple to use interface of just two knobs controls the nature of this relationship. In addition, there are three sonic modes that highlight modulation, comb filtering and resonant bandpass filtering, each of which takes their own spin on the reverb signal. The Mix, Input and Decay controls work exactly the same across each mode, as they help control the dynamics.

Mix sets the loudness of the reverb, which goes from all dry to all wet and anywhere in between, allowing you to create everything from subtle reverberations to deep ambient textures. Now, the interplay between Input and Decay is where the real Sunlight magic starts to happen. Decay determines how long the reverb trails will sustain, which will go from quick ephemeral evaporations to infinite reverb pads. On the other hand, Input controls how much of your signal is allowed into and fed back within the reverb. At zero, no new input will be added to your reverb, but as you increase it, more signal is let through, letting you create gently evolving ambient textures or drastically changing synth-like pads.

Rate and Depth are mode-dependent controls. TAPE Mode is a modulated reverb inspired by the unexpected shifts of a tape machine wobbling. Here, Rate and Depth set the speed and intensity of the lopsided vibrato applied to the reverb signal. COMB Mode is a combination of reverb and delay. Four delay lines are placed after the reverb, and the emphasis on stacked short delays creates comb filters like a fixed flanger. Rate sets the time of all four delays, and Depth sets the feedback (or resonance) of the delay section. PASS Mode is a bandpass filter applied between two reverb paths, where a random sample-hold function sets the cutoff frequency of the bandpass. Rate sets the timing of the sample-hold and Depth sets the range of possible cutoff frequencies. If Rate is set to 0, Depth sets a fixed cutoff frequency.

But the sound shaping adventure doesn’t end here. Sunlight also contains a bunch of expressive capabilities performed through the on-board ALT switch, which can be set to change control settings either momentarily or latching. It can be assigned to the Rate, Depth, Decay or Input controls or any combination of the four. You can also control them externally via an external expression pedal, the OBNE Expression Slider or even the OBNE Expression Ramper, which will open up even more creative possibilities.