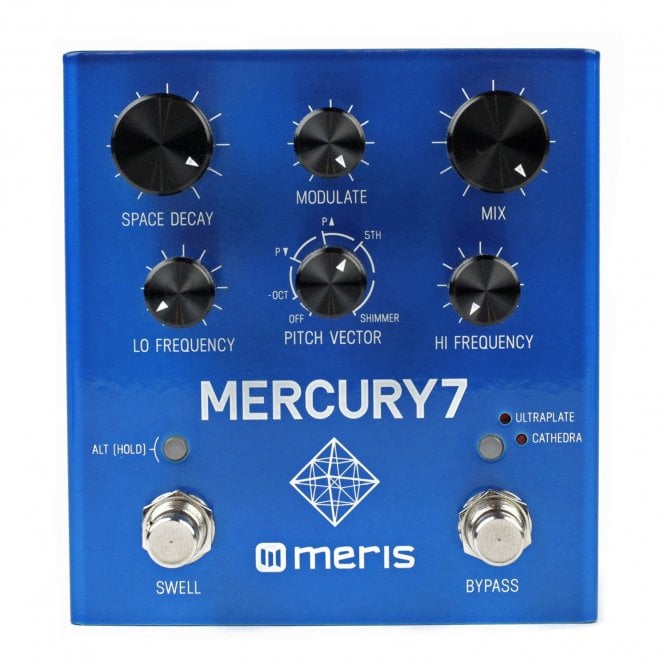 Inspired by Vangelis’ majestic soundtrack for the sci-fi masterpiece Blade Runner, the Mercury 7 Reverb Pedal is designed to send both humans and androids into an eternal dream state with its wealth of stunning reverb algorithms.

From subtle plates and huge cathedrals to massive building soundscapes, swirling modulation, epic auto-swells and cascading shimmering pads. Whether you’re looking to capture the sound and feel of well-known earthly spaces, or that of huge starlit galaxies far away, the Mercury7 is sure to deliver!

Meris has left no stone unturned in their journey to bring ultra-advanced studio reverb capabilities to your pedalboard. The Mercury7 takes everything that made the original and highly regarded Mercury7 500-series studio rack-unit amazing and distils it all into a compact, sturdy and super intuitive pedal fit for any rig and instrument out there.

Mercury7 sports two different reverb algorithms (Ultraplate and Cathedra), which alone deliver a superb range of ambient tones. Now throw in the ability to modulate, pitch-shift, swell, sustain and EQ the reverb in a million different ways via its rich control set and ALT functions and you have a reverb pedal that has your back whether you’re going for smooth on-stage ambience or otherworldly sound designs that could easily form the backdrop to your favourite movie.

In addition, Mercury7 holds one of the most impressive stereo reverb images ever made, vast MIDI capabilities and the ability to seamlessly morph between sounds via an external expression pedal. Mercury7 is in essence way more than just another reverb pedal. It’s a deep and highly musical creative instrument in its own right.