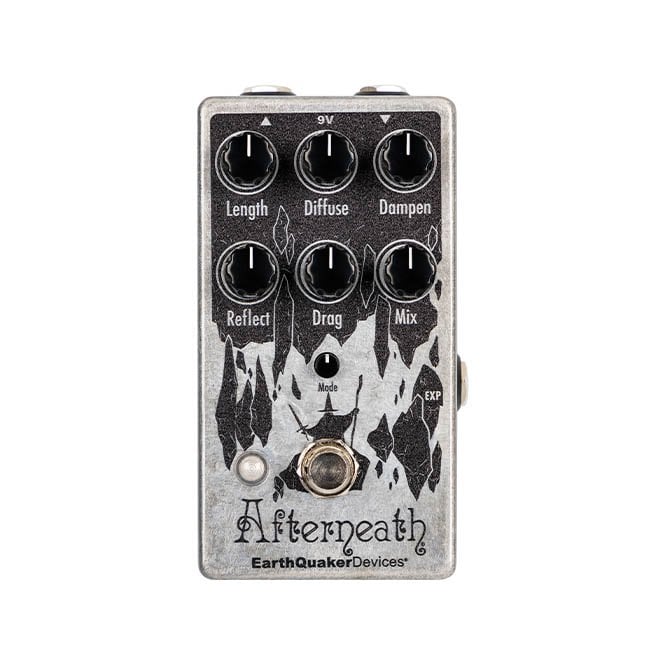 To celebrate the release of EarthQuaker Devices upcoming Afterneath Retrospective, they have created an extra special custom color Afterneath v3 pedal and Afterneath Eurorack Module available for a limited time only. The Afterneath Retrospective marks the fourth chapter in EQD's pedal documentary series, taking a deep and often hilarious dive into how some of their top-selling pedals came into existence.

EarthQuaker Devices has taken everything that was great about the original Afterneath and made it even better: 9 new Modes, CV/expression pedal control over the Drag parameter, Trails/No Trails Switching, helping to push the already unflappable Afterneath into a whole new realm.

Overwhelmed by fear, you hastily cast “Dampen!” As you shout the incantation, you notice that a counter-clockwise variation of this spell results in brighter tones, while as you rotate your wand clockwise; you hear darker tones with a mellower top-end. It’s almost as if your magic changes the hardness of the cavern walls, and thus the tonal characteristics of the reverb!

The “Reflect” alters the depth of the cave, and with it the regeneration of the reverb. This acts as a feedback control and will self-oscillate if cast by a high-level user. Turn clockwise for more wash and echoes, counter-clockwise for less. Finally, the “Mix” alters the alchemical balance between the input signal and the effect. The Afterneath V3 does not go fully wet but does lower the level of the input signal as you raise this control to create the appearance of a fully wet reverb.