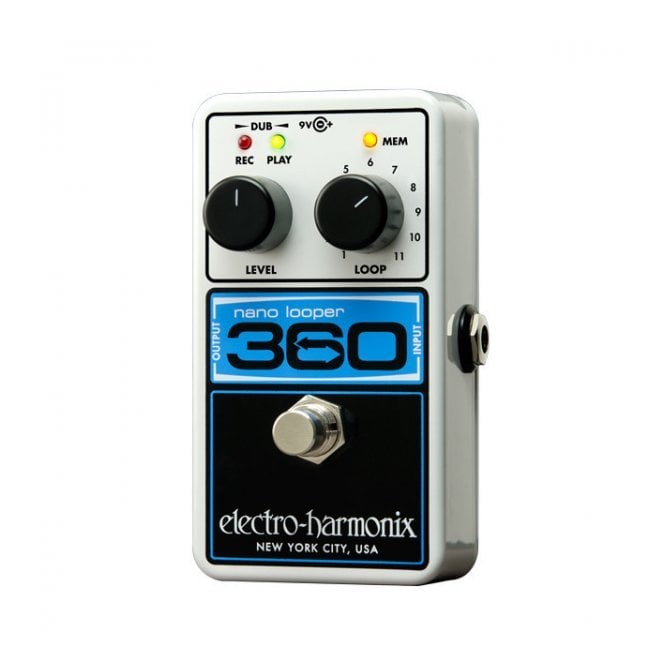 The 360 Nano Looper is the latest in the line of looping pedals from Electro Harmonix. As their smallest looper yet, the 360 Nano is packed full of features to make it a fantastic tool whether at home or on stage.

This super compact and easy to use looping pedal has an overall looping time of 360 seconds. Thats a whole 6 minutes for you to lay down your genius riffs and red hot licks. With the 360 however, you have the choice to use those 360 seconds in a number of ways.

Firstly you could record a whole epic 6 minute track with no overdubs; an excellent practice tool to reflect back on your performance from a listeners perspective.

...Or you could use your 360 seconds to create a shorter track, but with loads of overlaid parts; your only limit is those 360 seconds so a 10 second loop could give you up to 35 overlaid parts on a single track.

Finally, you could split your time into up to 11 different memory locations using the fantastic store mode. The great thing about these is that when you switch off and unplug, your tracks will be safe and sound and ready to pull out next time you switch on. Of course you don't have to use all 11 tracks at once, but if you did, you would still get around 32 seconds per track. This may not sound a lot, but with the average riff you're still going to get around 3 or 4 overdubs with a live performance over the top!

The 360 Nano is easy to use, consisting of a loop level control, a Memory location selector and a EHX designed silent footswitch. With one click to record and overdub, and two clicks to stop, the footswitch is easy to press in time and is comfortable to use, even when in your socks! To help you navigate the looping process, the looper has 3 bright LED's; a red one to show recording, Green for playback, and yellow to show the memory function.

You can run the 360 Looper on a 9v battery, but it also comes equipped with an included power supply for when you can plug into the mains.

Be the first to review 360 Nano Looper Pedal. Write a review ›
Ask A Question
Want to Part Exchange?
Share
?
Top