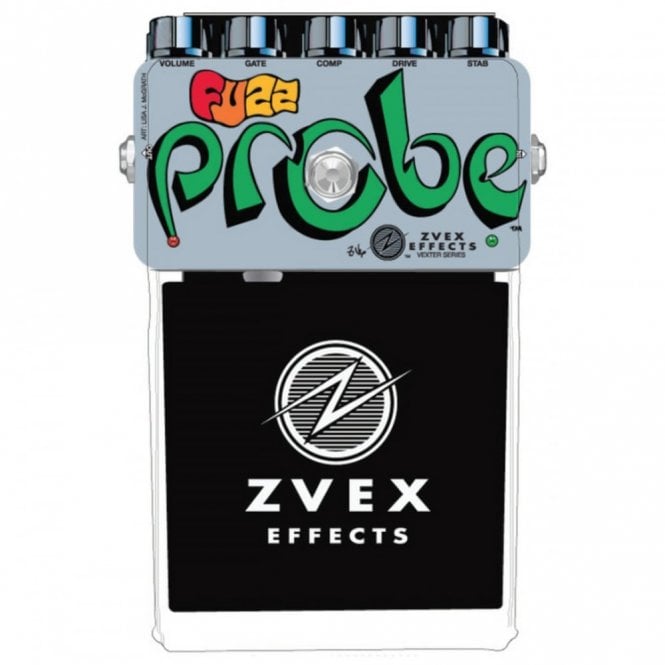 The older brother of the Fuzz Factory has a theremin-like antenna that lets you adjust one the knobs (STAB) by moving your foot or hand close to the copper plate, making it a big favorite of experimental noise fans, with its varying oscillation pitch and strange fuzz guitar interactions.

The Z.Vex Vexter Fuzz Probe is a kind of cross between a theremin and a fuzz factory. There is a 3 5/8" antenna plate mounted on a chunk of 3/8" clear acrylic that passes over the top of the pedal housing, angles down to sharp turn, and goes back to the pedal. Under the whole mess is a 3 5/8" by 7" sheet of aluminium that provides shielding from ground effects and wires under the stage. It also serves to protect the knobs from being knocked off if you drop it on them.

The antenna plate projects a field of RF energy that is affected by your foot (or other attachment), changing the circuit that generates it, and in so doing, increasing the brightness of that LED on the top of the pedal and also controlling the stability knob on the back. It could have made to just control that LED, but it's also linked it to the stability knob. This lets you select your favourite Fuzz Factory setting and then mess around with the stab knob with your foot and create little melodies and interference cadences with your guitar.

The Fuzz Probe can be powered with a 9V battery or any standard filtered/regulated musical 9VDC power supply with a Boss-style connector (negative-tip barrel connector).