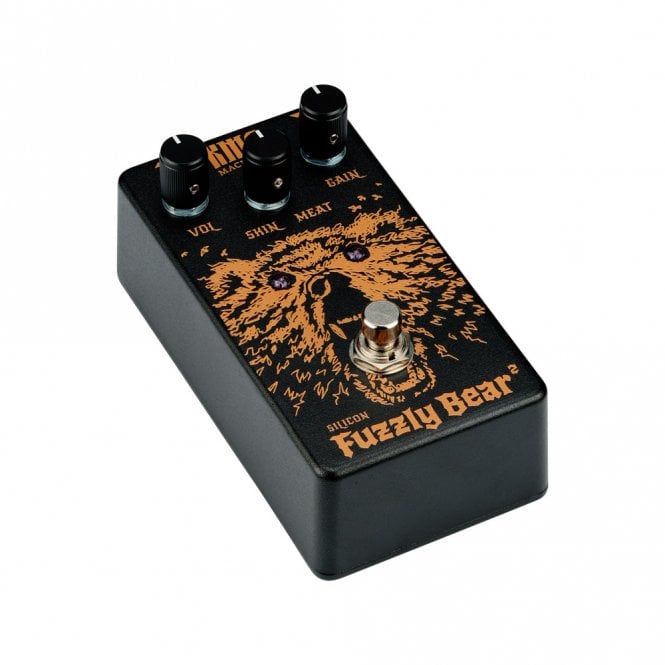 “Through the untamed wilderness of the forest strives a grizzly monster, its glistening eyes peeking through the undergrowth. Endowed with razor sharp claws and bone-crushing teeth, this beast will rip through any intruder that dares to trespass into its domain. A thundering, sizzling roar distortedly echoes through the woodland. It’s here! It’s time to face the FUZZLY BEAR!”

In 2013, KMA Machines’ first ever production pedal was inspired by an old, obscure and highly underrated fuzz box from the 1970s - the Jordan Bosstone. The original Bosstone wasn’t even a pedal, it was a device you plugged directly into your guitar, which brought a host of problems. Hence, we greatly refined the circuit for the original FUZZLY BEAR, to get the essence of that old-school sound, but giving it some modern twists by sorting out the low end and adding a Bias control, to help players explore lots of new tonal capabilities of this long-forgotten box of dirty tricks.

Back in the day, the main reason why the Jordan Boss Tone did not conquer the world of effects was actually due to its massive lack of bass. However, its core fuzz sounds could be truly heavenly with tones ranging from a purring overdrive, to downright vile and aggressive fuzz assaults. But when you awoke it, dug in and found ‘that’ tone, boy was it good and not at all harsh and gritty, like so many other fuzz designs at the time could be.

When designing and modifying the circuit, we kept all that fuzzy goodness, but brought back the essential low end and gave some more tonal control, all to make our take fit more modern styles without compromising the core sound and simplicity.

The GAIN knob delivers a whole range of different fuzz shapes. Back it off to get a dirty chunky overdriven tone, turn it up to give the FUZZLY BEAR 2 a thick and thicker coat of fur. Set the gain fully clockwise and magic will happen! The pedal’s smooth, warm and cosy decay turns into a starved and gated fuzz sound that almost gives a ghost octave, pseudo trumpety kinda vibe - perfect for classic tunes of yesteryear.

FUZZLY BEAR 2’s SKIN/MEAT control adjusts the bias of the circuit. Think of it as the claws of the beast. You can dial in a sharp drive tone that only brazes the skin, a thick and meaty wall of fuzzy fur that can rip right through the intruder’s flesh and anything in between.

Don’t confuse this pedal with a cute brown bear cub - this is the FUZZLY BEAR 2 and it will maul your face off!