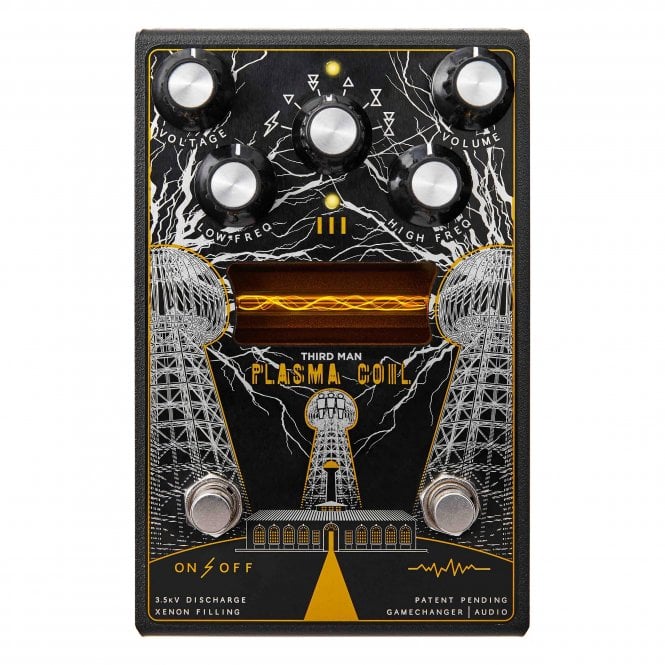 The PLASMA Coil is a version of PLASMA pedal designed together with Jack White and Third Man Records. Jack White used it on the Raconteurs’ latest album Help Us Stranger and in the following tour.

The PLASMA Coil takes HIGH VOLTAGE DISTORTION to new heights by adding intense, gritty and glitchy octave up and down effects that are achieved by driving the high voltage transformer and are unique:

It is the PLASMA pedals insane brother. The octave effects will add massive low and high end to higher notes and intense overload of gain to lower notes.

The PLASMA Coil is a revolutionary way of producing distortion by converting your instrument’s signal into a series of high-voltage plasma discharges in a sealed xenon filled tube.

The result is an incredibly sharp and sizzling overdrive that is extremely clear, responsive, and most importantly fun! This patent-pending technology of high-voltage electric discharge also acts as a natural noise-gating device that creates strong contrasts between staccato notes, as well as eliminating all unwanted noise and pick-up hum. The PLASMA Coil’s electric discharge tube produces beautiful visible bolts of lightning that react to the input signal, thus creating a captivating experience for all players. In essence – you are playing a bolt of electricity.

Natural Noise Gate
As soon as you stop playing the electrical discharge within the gas-filled tube is interrupted, and the pedal will not produce any output signal at all. This feature allows you to achieve extreme contrasts between individual notes, by eliminating all of the in-between noises created by the instrument’s pick-ups or by humming strings.

Extremely Wide EQ
The PLASMA pedal loses the original dry input signal and creates a new signal from fluctuations in the electromagnetic field surrounding the gas-discharge tube. This allows for a very wide range of frequencies. Boost and cut the lows and highs with the dedicated knobs. The EQ can be switched to affect only the wet sound or dry sound, which is especially suitable for bass.

Unique Harmonic Saturation
PLASMA pedal converts your instrument’s signal into a rapid series of electric discharges, which results in a large amount of non-linear harmonic saturation that causes extremely rich and responsive attacks, and brings out screeching sharp overtones and harmonics. These harmonic artifacts, produced as a by-product of the high voltage discharge are uncommon in traditional signal amplification, and therefore PLASMA Pedal’s distortion is unlike anything you have heard before.