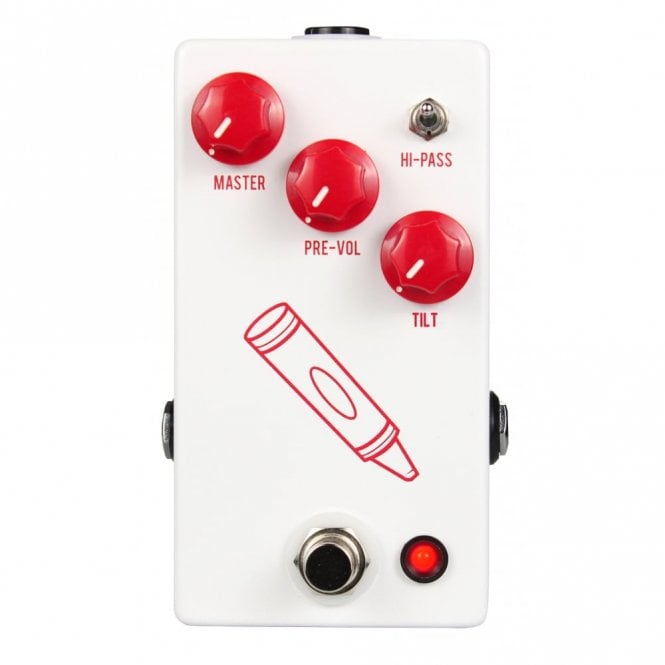 In 1968 a piercing guitar tone came through the speakers on the Beatles “Revolution 1”. This is one of the most famous uses of plugging a guitar straight into a mixing console and creating the now referred to as “Direct-In Distortion". That tone is one of the most recognizable and unique guitar tones of the last 60 years and was one of the inspirations for the JHS Colour Box that we released in May of 2014. We sought to recreate that same compressed bite and fuzz that you get when plugging directly into a British style preamp but in a compact pedal. What we came up with was something even more than we imagined, and the Colour Box has become a staple among many producers, guitar players, and multi-instrumentalists world wide. Many players over the last few years have expressed their interest in a unit that is like the Colourbox but more streamlined for the one basic application of a dirt box. No XLR function, no 3 band EQ… Just the dirt in an easy to use format for guitarists… So we decided to pull the Crayon out of the Colour Box.

The controls are Master, Pre, Tilt, and Hi Pass. “Master" is your classic volume control that controls the overall output. “Pre" works as a drive or fuzz control like turning up the pre-volume on a preamp to send it in to overdrive. As you reach 75% and above, the fuzz will begin to gate out as you pick the strings harder when playing, it is very responsive to your input signal and touch. The “Tilt" acts as an active tone control that is flat when the knob is at 50%. When turned to the left, the Tilt control boosts bass and simultaneously cuts treble. When turned to the right, it boosts treble and cuts bass. This allows for some very unique and usable adjustments to the overall feel of the Crayon. The “Hi-Pass” toggle switch lets you activate from two different frequencies located on the side of the pedal, 200Hz and 750Hz. These settings let only the high band frequencies above them pass, and this allows for some amazing tone shaping possibilities.

The Crayon excels at Direct-In fuzz tones, but it truly covers more ground than you would first imagine. From subtle tube-like overdrive to classic rock distortion and all the way to spitting fuzz, the Crayon is much more than a one-trick pony. The Crayon also cleans up with your guitar's volume better than any other drive we make. It is exceptional for the player who want to access multiple dirt tones with the controls of their guitar.

The Crayon may be the tone you’ve heard and always wanted, the tone that you never knew where to find. Add this Crayon to your palette of tones and color your own unique voice.