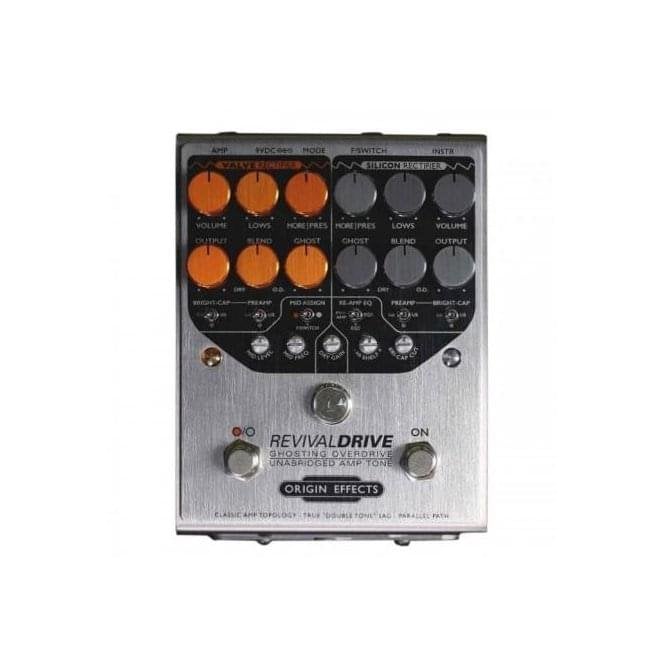 ABOUT THE RevivalDRIVE CUSTOM

The RevivalDRIVE CUSTOM takes this concept even further, adding extra EQ and filter controls that let you fine-tune the pedal to match almost any amplifier. Designed for maximum versatility, the RevivalDRIVE CUSTOM features additional front-panel controls and a secondary EQ that will let you precisely match the pedal with almost any amplifier. For touring players, it’s the ultimate fly-rig overdrive!

The RevivalDRIVE is the first overdrive pedal from Origin Effects, the creators of the game-changing Cali76 and SlideRIG compressors. For these pedals, Origin took the legendary Urei 1176 as their inspiration. By following the same analogue circuit topology but adapting the design and components to work in a pedal format, they managed to deliver the sound and response of this classic studio compressor in a stompbox.

For the RevivalDRIVE, they’ve applied the same approach to overdrive. But rather than look at other effects, they’ve gone straight to the source of great overdriven tone – the vintage non-master-volume valve amps of the ‘50s, ‘60s and ‘70s.

The footswitchable Valve Rectifier and Silicon Rectifier channels feature a comprehensive array of controls that let you adjust gain, preamp voicing, low-end distortion, presence and clean-to-overdriven break-up characteristics. You can also set how much of the ghosting effect you want and tweak power amp sag characteristics. The pedal features a fully variable, switchable mid-range boost, as well as a blend control that can be used to mix the dry and overdriven signals together.

The RevivalDRIVE also boasts clever EQ compensation features so that the player can adapt the pedal’s output to suit their amp of choice, or even plug straight into a PA or flat-response power amp.