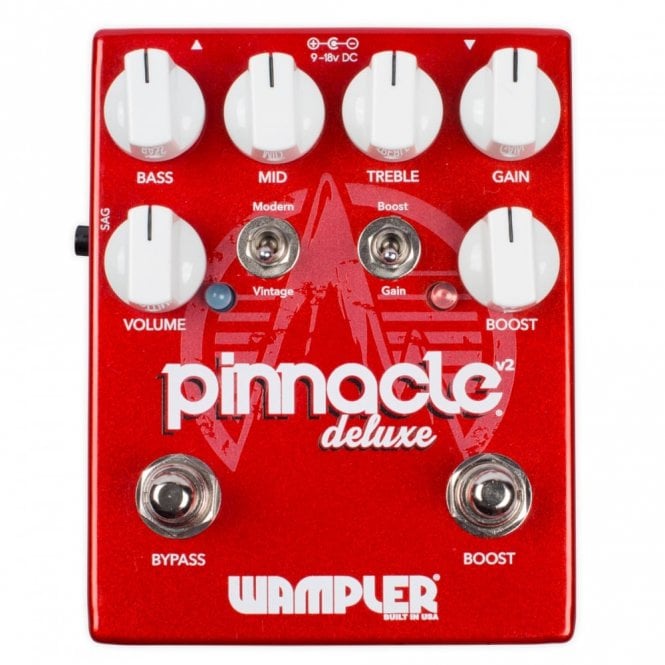 The Pinnacle Deluxe V2 has the same gain and attack is its smaller V1 brother but with the added functionality of a separate boost switch for solos as well as a 3-band EQ for a more focused gain sound. Giving you more control over the tone you want out of the pedal.

Brown Sound and Beyond

The V1 Pinnacle Deluxe was well known for it's brown sound capabilities getting you close to the Eddie Van Halen tone, but the V2 pedals have become more focused on giving you any gain sound you want. From vintage, amp-overdrive to modern metal screaming and the addition of a SAG switch on the side of the pedal allows you to replicate tube-amp compression like never before.

Here's what Wampler say about the Pinnacle overdrive/distortion pedal

Building on the foundations of the Pinnacle Standard and the original Deluxe, we are proud to bring to you the V2 of our biggest selling distortion pedal, the Pinnacle Deluxe.

We took everything we loved about the original and added many options to make the pedal more versatile. Before now, the Deluxe was the same as the standard but with the boost on the stomp instead of a switch. The V2 comes with a new EQ, more control and much more versatility.

The first thing you’ll notice is the 3 band EQ. With this, you will be able to sculpt your tone like never before. We’ve also added bright and bass boosts, so you can get that fresh tone or the thump of a 4x12”. Then, we added the “Valve Screamer” based pre gain boost (that you can use when the pedal is bypassed) – we all know how good this style of circuit pushes gain stages… Then, the secret weapon. One the side is the SAG switch. This can allow you to remove that saggy crunch and tighten the response up dramatically, so – this V2 offers not only an updated take on a Wampler classic, but also a plethora of new features that will be irresistible to tone chasers everywhere!

The Pinnacle Deluxe V2. From the Brown Sound to classic rock. From amp overdrive to screaming metal, you CAN have it all.

The Pinnacle and Pinnacle Deluxe share the same great tone. The difference comes in the form of a couple special features found on the Deluxe version that make it more involved for us to make, but which add some extra versatility for you. While the standard Pinnacle has a toggle switch to control its Gain Boost, the Pinnacle Deluxe has that same functionality on a foot switch, so you can kick it in without having to bend down in the middle of a song. The only other difference is that the Pinnacle Deluxe has an additional, internal volume adjustment (just in case you need to go to “11” on the output volume). Because of the added switch, the Pinnacle Deluxe is a little bit larger than the standard Pinnacle, something to keep in mind if you're running a packed pedal board.

Which Pinnacle is right for you isn't a question of tone, because they both nail that coveted “Brown Sound”..! It just comes down to whether you need the special features found on the Pinnacle Deluxe, or prefer the smaller footprint of the standard Pinnacle.