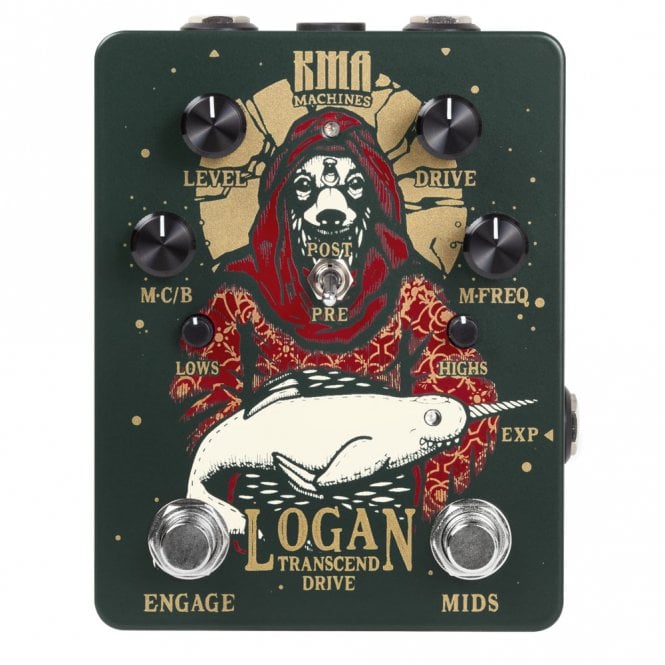 Take a walk in the gritty dirt and breathe in the crystal-clear mountain air, exactly as Logan once did on his journey to glean the beauties of both nature and mankind. Once you hear Logan’s sweet and graceful sounds you will be driven to find your own way into the transcendental tone kingdom. So plug-in and let Logan guide you into a new era of overdrive.

Logan is made to transcend the well-known boundaries of overdrive. It doesn’t matter if you are looking for a pre-amp, a low/mid-gain drive or a screaming resonant cocked-wah sound, Logan will deliver all the gainy goods. Combined with our active 3-Band EQ, including a fully parametric Mid-EQ with a separate On/Off-Footswitch, Pre or Post Gain position-switch and an expression-in for hands-free filter sweeps, Logan is sure to deliver great tones and outstanding flexibility.

Yeah, yeah, we know... yet another overdrive pedal! Does the world really need more of them?

Well, in the case of Logan, we honestly believe the answer is a resounding YES! Otherwise we wouldn’t have spent over a year conceptualizing, designing and perfecting Logan in order to give the world a drive pedal that will add immense tonal dimension and flexibility to anyone’s setup, all while preserving the natural characteristic and feel of your beloved instrument.

Logan’s gain structure is carefully balanced for an open and super touch-responsive drive tone, giving you and your instrument ample room to be expressive. You could describe its sound as smooth and harmonically rich, but that would be selling it short. There’s a true fire raging under the embers here, one that allows you add more hair, grit and sizzling depth as you pile on the gain, making Logan fit for anything from clean boost, amp-like breakup, indie clang to full-on rock machine.

It also sports an impressively high-headroom-design (up to 25 dB), enabling you to use Logan as a very versatile pre-amp too - all of you amp-less/cab-sim players can thank us later. But what truly pushes Logan over the edge is its 3-band active EQ. The Bass and Treble EQ knobs are able to both boost or cut your signal by around 15 dB. This enables you to beef up thin-sounding single coils, add some chime to chunky humbuckers or get rid of boomy bass frequencies, when changing from a sweet 2x12 to a fat 4x12 cabinet. In addition, the tonal flexibility is even further extended by Logan’s fully parametric Mid-EQ section, where the MID control lets you set your preferred mid frequency between 100 Hz to 2.5 kHz, while the CUT/BOOST control lets you cut or boost the selected frequency by up to 12 dB.

But the frequency fest doesn’t stop there. Logan even sports a dedicated footswitch to activate or deactivate the Mid-EQ and a position-switch which lets you place it either before the main gain-stage (PRE) or after it (POST), opening up a whole world of tonal possibilities. Place the Mid-EQ post-gain to give yourself a level boost for solos or place it pre-gain to saturate your preferred frequency even more, effectively giving you a second gain-stage.

Then there’s the kicker! You can take complete hands-free control of the Mid-EQ Frequency via a regular expression-pedal. This lets you make instant tone changes on the fly, as well as unleash everything from fast and quacky wah-like sounds to slow and enveloping phasery filter sweeps. You’d think the feature-well would have run dry by now, but no, there’s even more cool sonic secrets under the hood. The pedal has been set at the factory to sound stellar right out of the box, however some people might want to tweak some more options to taste. Via a hole in the base plate, you get direct access to an internal trim-pot to set the bandwidth (Q) of the Mid-EQ. Turn it counterclockwise for a broad bandwidth, for smooth frequency sweeps or turn it completely clockwise for really resonant sounds. Removing the base plate will reveal a second trim-pot, which enables you to blend in your clean signal with the overdriven tone, making Logan transcend the world of guitar. Bass? Drums? Synths? Vocals? Bring it on! This pedal will handle it all.

Logan really is an all-in-one overdrive solution and trust us, once you plug in you’ll never want to turn it off again!

Be the first to review Logan Overdrive Pedal. Write a review ›
Ask A Question
Want to Part Exchange?
Share
?
Top