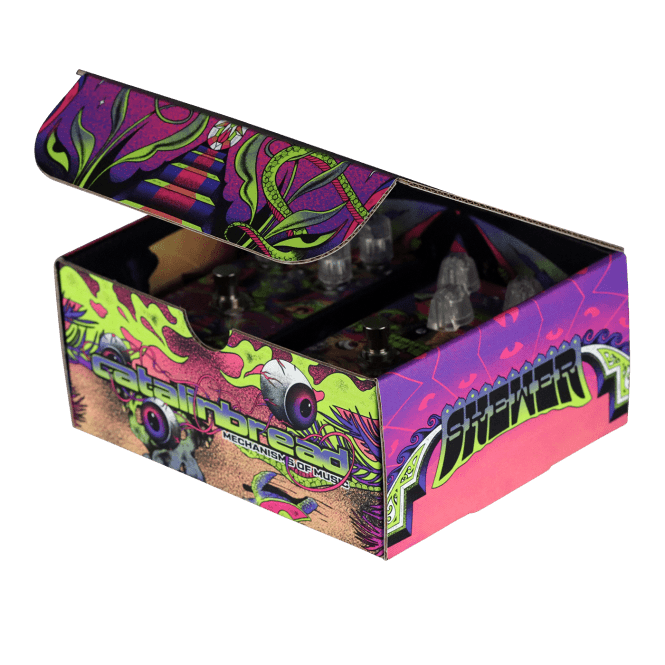 The tools that inspired Ritchie Blackmore have been recreated to inspire you.

Catalinbread have released two brand new pedals in a special edition combo box, the DREAMCOAT and the SKEWER. The pedals will be sold exclusively as a box set for one month and at a discounted rate. After the first month, customers can get each pedal a la carte but at full retail price. The pedals were designed to be used individually, but they really come to life when used together. The artwork of the two pedals flow into each other as one cohesive piece. Inspired by multiple periods of Deep Purple’s Ritchie Blackmore, the DREAMCOAT and SKEWER capture a classic tone for a modern era.

What started out as a quest for Ritchie Blackmore’s tone in a box turned into something greater than the sum of its parts. The DREAMCOAT is our answer to the tone of customer emails asking for a Blackmore-inspired pedal. The Deep Purple and Rainbow guitarist is one of the earliest certified gear nerds, owing his tone to heaps of modded gear, unconventional equipment and secret circuits. It starts with the axe; Blackmore’s longtime tech John “Dawk” Stillwell installed a passive inductor-based EQ circuit right into the body cavity of his guitar that emphasized the resonant frequency of Blackmore’s Strat, bringing pinch harmonics to life with a cutting top end. From there, Ritchie used the Mic input of an Aiwa TP-1011 reel-to-reel deck for his preamp which pummeled the front end of his Marshall Major. The DREAMCOAT serves up an active, adjustable frequency boost, a clean blend and a vintage- correct Aiwa circuit, including the proper operating voltage of the original unit and an all-new saturation control for the Aiwa pre that delivers everything from a delicate, crystalline boost to amp-melting doom sludge. Blackmore tones? Yeah, they’re in there. Tons of volume? You bet. But you can also use the DREAMCOAT to dial in every shade of classic rock you’ve ever dreamed of.

One of Blackmore’s most recognizable pieces of gear is his old Hornby Skewes Treble Booster, a version of the classic effect used by too many artists to list. While almost all of them used a Rangemaster, the Hornby-Skewes version came stock with a silicon transistor for a more biting sound that cut through even the densest of mixes. The SKEWER stays true to that circuit, giving the old JHS unit the same treatment as our Naga Viper. This lets you dial in the desired frequency range from rich and full to treble-heavy, as well as control the amount of boost. You can also vary the amount of transistor gain for some extra juice. Of course, because it’s Blackmore we’re talking about here, he had his original Treble Booster modded to play nicer with the rest of his gear. We’ve taken the liberty of giving you that mod as well, which is fully adjustable via the trimpot inside. Further enhancements include a noise reduction filter and anti-pop switch circuitry. This one bites just a little harder than our Naga Viper, and sounds fantastic with the DREAMCOAT.