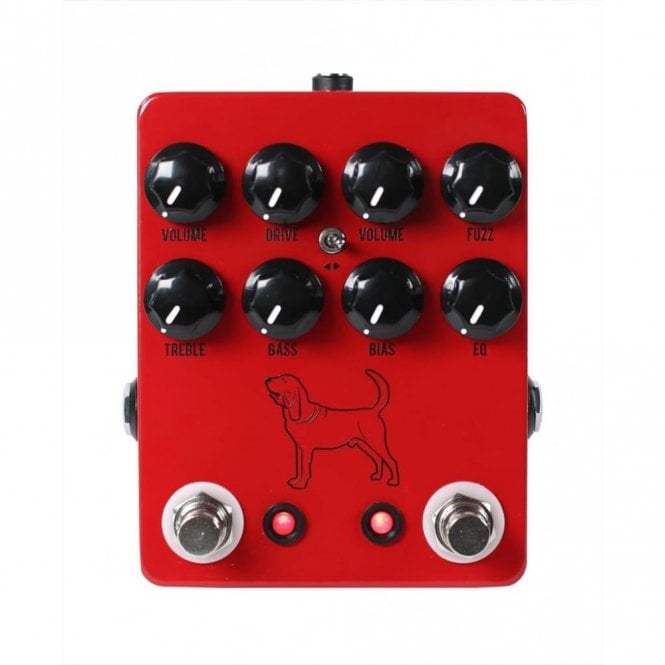 The Calhoun (pronounced cal - like california, hoon) is the first signature pedal for legendary guitarist Mike Campbell who has played guitar with Tom Petty and the Heartbreakers, as well as Don Henley, Bob Dylan, Johnny Cash and many more.

It's a 2-button overdrive and fuzz pedal with the same option to stack the pedals in any order (you do this with the toggle in the middle of the pedal).

The easiest way to imagine this pedal is if you draw an imaginary line down the middle and separate the 2 tones in your mind.
It’s as if there are 2 different pedals in one unit, they have been voiced to match with each other in terms of EQ, so that you don’t get any clashing frequencies.

The drive sound is an awesome example of mild overdrive. It’s got a lovely twang and bite that will let your rhythm tones chime without becoming muddy. It isn’t overly driven so that you can have great clarity but when you want more dirt, you can dial in the fuzz…

The fuzz is dirty but without sounding too thick. It has a lot of bite but the treble can easily be controlled with the bias knob. Imagine the ‘bias’ as the brightness and you’ll be able to easily dial in your tone.

Here's what JHS Say about the Calhoun V2

The Calhoun V2 is a collaborative signature pedal for legendary guitarist, writer, and producer Mike Campbell. Mike is most known for his role in Tom Petty and The Heartbreakers, but he has worked closely with such artists as Don Henley, Bob Dylan, Stevie Nicks, George Harrison, Jackson Browne, Brian Setzer, Johnny Cash, Fleetwood Mac and The Wallflowers to name a few. He also is a founding member of Mudcrutch and has a side project called the Dirty Knobs. When the opportunity to create his only signature pedal came to us, we were honored, to say the least. Let's go over what the Calhoun V2 has to offer.

The Calhoun V2 is a 2-in-1 overdrive/fuzz pedal that is designed around Mike's specific desires for live and studio performance. The left side of the Calhoun is the drive portion of the pedal with Volume, Drive, Treble, and Bass controls. The Volume control is a master level control allowing you to set the maximum or minimum volume of the pedal. The Drive control adjusts how much dirt/distortion you are allowing in the circuit. The Treble and Bass controls adjust the EQ of the pedal, allowing you to darken and brighten the frequencies as needed. The right side of the Calhoun V2 is the fuzz portion, with Volume, Fuzz, Bias, and EQ controls. The Volume control acts as the same master volume control as the left side. The Fuzz control adjusts the intensity of the fuzz sound. The Bias control adjusts the voltage to the circuit allowing more powerful tones that bloom with more headroom or weaker and more saturated tones. The EQ control lets you set the range of tone from dark to bright as you wish. The toggle switch allows you to choose the order of the two effects when stacked (both on at the same time). The effect that the toggle is pointed at is first in series; this lets you stack the effects in whichever way you desire to achieve different textures of stacked tones.

The power jack is a standard 9v DC operation. The right 1/4" jack is the input jack where you plug in your instrument. The left 1/4" jack is the output jack where you go out into your amplifier.
Last but not least you may have noticed from the first look demo we shared with you from the Heartbreakers rehearsal space in LA: Calhoun is a real dog. Not only does Mike love dogs but he and his wife are very involved with an amazing organization called The Tazzy Fund. Mike has requested that every penny of his profits from each unit go directly to The Tazzy Fund Animal Rescue to help fund its needs and mission.

The Calhoun is the perfect pedal for the player who wants straightforward, no frills and easy to use dirt tones in a single package. It covers everything you need for rock and blues tones with ease. Be a part of rock & roll history and join Mike by adding the Calhoun V2 to your rig!