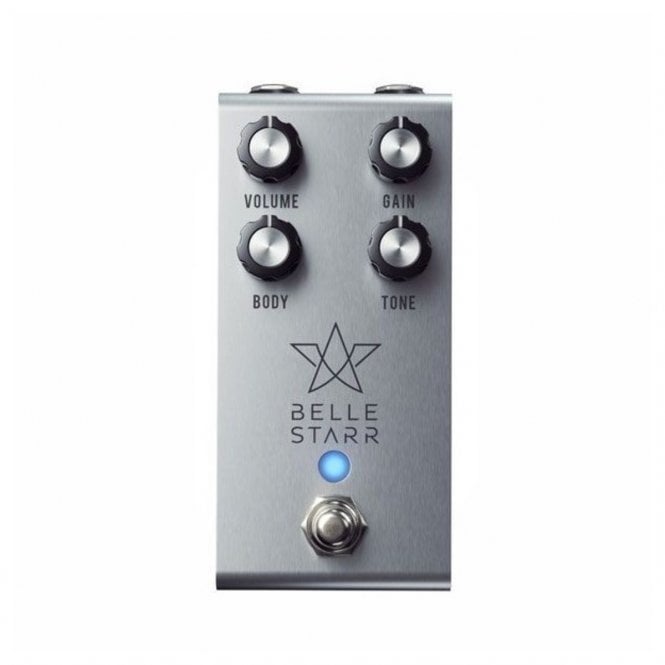 Small, compact, powerful. Keep the tone of your instrument in form with the Jackson Audio Belle Starr Drew Shirley Signature Drive. This pedal is nothing short of incredible. It is the end result of several months of hard work and collaboration with legendary guitarist, Drew Shirley. The very same Drew Shirley from the Grammy winning band, Switchfoot. Taking every aspect of his tone into consideration when crafting the drive pedal. Jackson Audio ensured that the Belle Starr perfectly recreates Shirley's signature sound that is associated with compact, low-watt tube amplifiers.

Don't write the Belle Starr off as yet another high-gain overdrive pedal . It's not even remotely close. The drive pedal offers a low/mid gain circuit to authentically emulate the gentle breakup characteristics of compact, non-negative feedback amplifiers. The reasoning behind this to to ensure that the overdrive sounds as natural as humanly possible. Going above and beyond when crafting the Belle Starr, Jackson Audio opted for MOSFET transistors instead of generic diodes made from silicon. You'll find that when they're pushed to the point of clipping, they offer the same sonic characteristics of amplifiers.

Jackson Audio went through a pain-staking process of pairing the Belle Starr with every amplifier known under the Marshall, Fender, and Vox umbrella. This was to make sure you'd receive a quality, highly usable sound no matter what your set up is. There's something for everyone here!