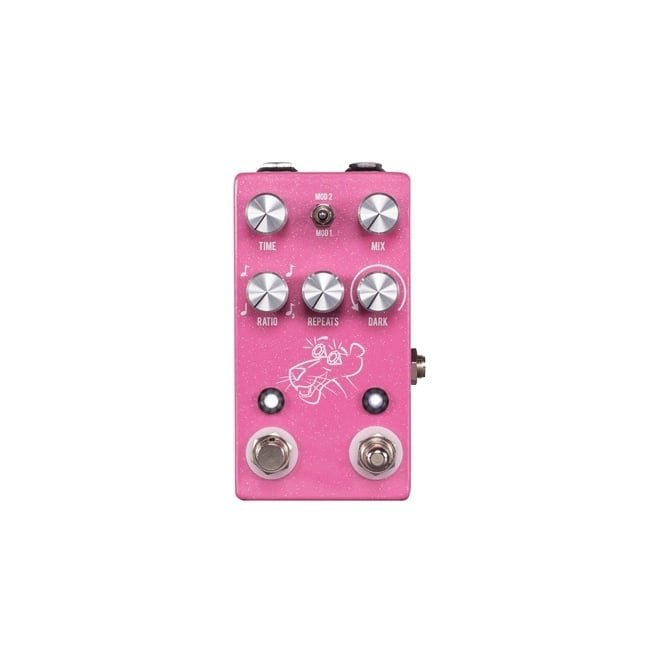 JHS released the Pink Panther Delay back in 2007, and it was one of the first pedals produced by the company. Only a limited quantity of these desirable pedals were made, and originals sell for high prices and are heavily sought after by pedal maniacs and collectors.

With high demand from fans old and new, JHS have brought back the Pink Panther. Modernising it with digital processing for maximum versatility and ease-of-use.

The first iteration of the Pink Panther and subsequent JHS delay pedals have delivered pure analogue bucket brigade delay sounds. Although this satisfied the purists, this new version uses full digital processing to give you the most versatile delay sounds in a single compact pedal.

The Pink Panther takes inspiration from some iconic digital delay units of the past, to deliver sounds that only analogue cannot. However, the Digital/Tape switch still allows you to get your favourite old-school tape delay sounds - with sweet saturation and compression all from one switch.

With multiple controls to let you sculpt and shape your perfect delay sound, the standard mainstay delay controls are still featured - Time, Mix and Repeat. These allow you to set the delay speed, repeat level and number of echoes respectively, but the Pink Panther also features some more unconventional controls to set it apart.

The Dark control lets you affect the brightness of the repeats. Fully cranked you get crystal clear repeats with no loss of fidelity, but turned further down the repeats darken to give you a more vintage delay character, perfect for lead playing.

There is also the Modulation toggle switch, letting you get some chorus-laden delay repeats for a dreamier vibe. Position 1 gives you a subtle wash of modulation with a beautiful shimmer, with position 3 taking it one step further with a higher intensity. Place the switch in the middle to bypass the effect, if a pure unaffected delay sound is what you’re after.

The original Pink Panther was one of the early JHS pedals in our line and was the first JHS delay pedal dating back to 2007-2008. The new Pink Panther is now the continuation of our delay line, and it embraces our goal to bring you a highly versatile, simple and unique line of delay pedals.

The original 2007-2008 era rare/original units sell used for upwards of $500, so we thought it was time to go back to the drawing board to bring you what we consider the ultimate JHS reissue nearly ten years later. While the Panther Delay (large box, silver) and Panther Cub V1.5 (smaller box, teal) offer up authentic and genuine bucket brigade analog goodness, the Pink Panther takes a different approach: unashamed digital processing.

Some of our favorite delay pedals ever made are early digital delays like the Boss DD-5, Ibanez DE7, DDL and the DOD DFX9. We think that the Pink Panther tips its hat to those units that replicate, effect and mold your guitar tone into something that only digital delay can.

With a small footprint, loads of features and a simplistic user experience, we believe the Pink Panther is the diamond heist you have been looking for!

Look no further; the Pink Panther is here to stay!