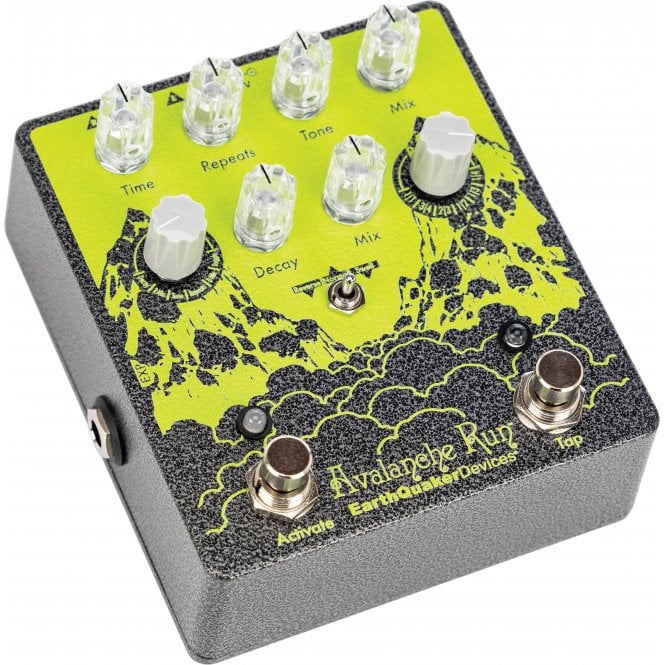 What EQD have to say
The other night, after eating a full box of cheese flavored snacks right before bed, we had a dream that the Avalanche Run V2 had morphed into a silver and yellow demonic creature. Upon waking, we thought, hmm – eating that whole box of cheesy things at midnight might not have been our greatest idea. Then we thought, ya know – that Avalanche Run did look pretty sweet.

Now our weird dream has become a reality! We decided to make a handful of special hammertone silver and yellow Avalanche Run V2 RYOs (non demonic). We think they’re pretty spiffy, so grab one while you can!

The Avalanche Run is a dreamy sonic discovery device with up to 2 seconds of delay time and a lush reverb. It features complete control over delay time, repeats, mix and voice (with the tone control), as well as control over the reverb length and mix. It can run in one of 3 different modes: Normal, Reverse and Swell. In Normal mode, the Avalanche Run functions as a straightforward delay and reverb. In Reverse mode, the delay line is in reverse and the reverb remains in normal mode. In Swell mode, the Avalanche Run reacts to your picking dynamics and adds a volume swell to the entire signal path much like manually raising and lowering the volume of your guitar.

The Avalanche Run features an expression jack that can be assigned to one of six different controls using the EXP selector switch. It also features Tap Tempo with six different ratios accessed via the Ratio selector switch. The Avalanche Run can also be run in True Bypass mode or Buffered Bypass mode for trails and features 5 different tail lengths including Infinite for lo-fi and continuously degrading pseudo-looping.

Each and every Avalanche Run V2 is completely assembled, wired and tested by total human beans in the tiny tundra town of Akron, Ohio.