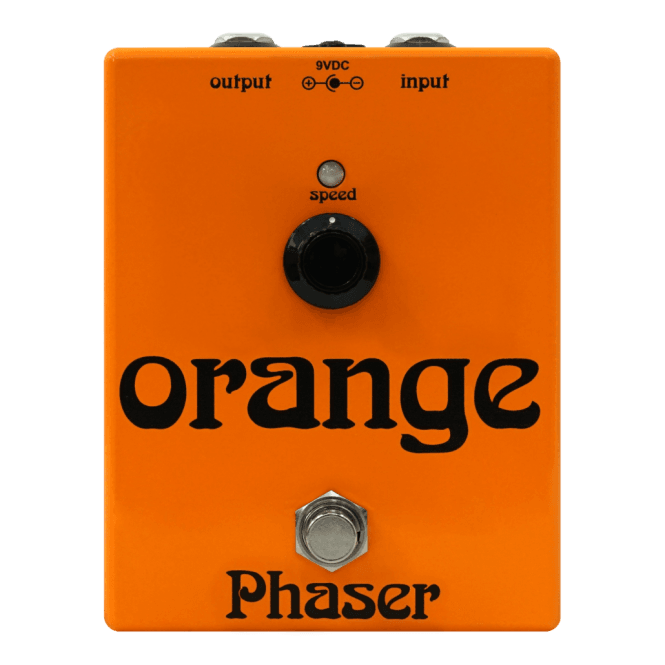 Some phasers can be really hissy, but the Orange Phaser has reduced noise on the input compared with the classic 1970s counterparts, thanks to a JFET input buffer.

The Phaser is has true-bypass design, meaning that when the pedal is switched off, your chain – and your tone – won’t even know it’s there.

Most phaser pedals are full of switches and knobs to toggle every variable imaginable. The Orange Phaser is different: with only one knob, this is a set-it-and-forget-it design made for ultra simplicity.

IT LITERALLY HAS ONE JOB

When you have a specific job that needs doing, the solution is obvious: you hire a specialist. And when you want to add a classic phaser effect to your sound, it’s the same deal: you want a pedal that does exactly that, and only that. No muss, no fuss, no superfluous bells and whistles — and, crucially, zero intrusions on that sweet psychedelic swirl.

And that’s where the Orange Phaser excels, with a single adjustable dial to take your tone from slow, woozy sweeps to fast, choppy stabs, via kaleidoscopic whirling and insistent krautrocking pulses, leaving everything else to precision engineered four-stage circuitry rebirthed from the original hand-drawn schematics. Drawing inspiration from Orange’s classic “Phazer” from the early 1970s (its name respelled in English that’s as proudly British as the pedal’s construction), but given modern standards like an LED and a 9V DC input, and circuitry tweaks inside the box to reduce the the noise floor, the Orange Phaser adds a nuanced, warming spin to your sound with the maximum simplicity. With the same form factor and minimalist artwork as the originals, all tank-strength aluminium chassis, block colour, and art nouveau typography, a mere glance at the thing will transport you back 50 years. Then, when you stomp on the footswitch, the time-travel will be complete, with as clean an interaction with a pedal as you’ll ever encounter. After all, this is the Orange Phaser: it literally has one job.