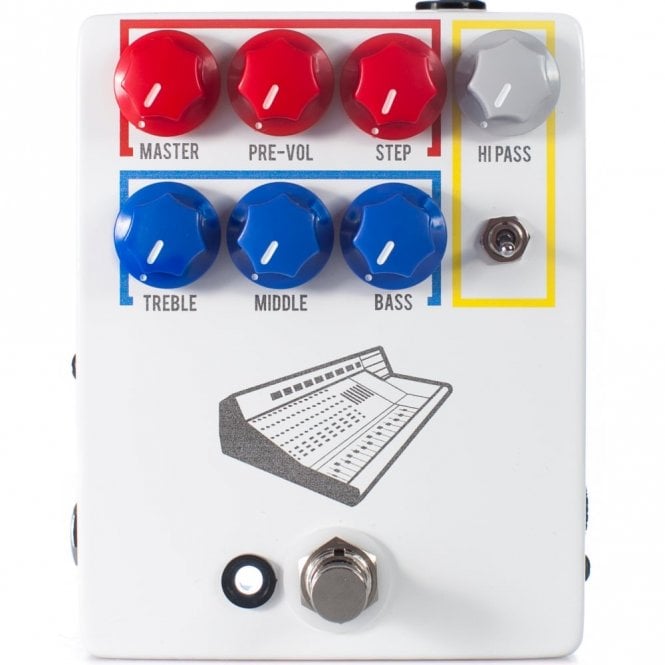 In 1961 a British engineer would start a company from a spare room in his England home that would permanently change the history of the Pro Audio industry. This company set a trajectory for musical tones that spanned across genres and impacted every generation that followed. We are talking about the famous piece of gear known as the Neve* recording console. From "Love Me Do" by The Beatles to the famous sounds of Led Zeppelin, U2, Spoon, Pink Floyd, Motown, Quincy Jones, Nirvana, Steely Dan, Neil Young, Tears For Fears, and Tom Petty (the list is endless), The Colour Box is our tribute to the legend and application of how a piece of gear can change music.

Have you ever heard songs like the Beatles "Revolution", or Motown classics like Jackson 5, Marvin Gaye, or even the modern Radiohead's "Bodysnatchers" and thought, "How are they getting that guitar sound?"  Well, the answer is sort of clothed in obscurity, but it's actually created by the simplest practical application......plugging a guitar directly into a vintage studio console and recording "direct in." The JHS Pedals Colour Box is designed and created to allow you to recreate these guitar tones with your live rig, or in a studio environment by using 100% analog circuitry true to the design and schematic of vintage Neve* circuitry. The Colour Box is completely free from any digital modeling. Never before have "direct in" tones been available from your guitar amp in the way that the Colour Box delivers them. Aside from creating these "direct in" tones, the Colour Box covers all the ground that you would expect a high quality studio preamp to cover. From your microphone, bass, keyboard, or even your acoustic guitar, it does it all.

Whats Inside?
We have gone to great lengths to bring the color and character of a real vintage console to your feet or desktop. We started with two gain stages in series that produce beautiful clean tones but that can also destroy any signal into a beautiful fuzzy mess, full of rich harmonics and body with over 39db of gain on tap. The local feedback of each gain stage makes for a very unique type of distortion. We used the same topology and discrete gain stage found in the Neve* 1073, but we have two gain stages in series instead of one.  We use a high quality Lundahl transformer that adds weight, heft, and a 3D quality just like preamps that you will find costing much more. The transformer fattens the lows, adds harmonic complexity and richness to the midrange (kinda like stirring flour into your drippings to give you gravy) as well as smoothing and rounding of the high frequencies. It also blocks all DC voltages, adds electrical isolation, and blocks RF frequencies ensuring super quiet operation and noise floor.

The Controls and Jacks?
Think of the controls as three separate sections:

1. Gain (RED)
The gain structure is made up of three parts:
–The Pre Volume (labeled "Pre-Vol") can be used the same as you would a Drive knob on an overdrive pedal. In this circuit, the Pre Volume is between the two gain stages, and the setting of the Pre Volume determines how much signal continues to the second stage.
–The Master Gain (labeled "Master") is what would typically be considered as a Volume control. Other terms are "master volume" or the "output trim."
–The Step Gain (labeled "Step") changes the gain of each preamp stage in five stages. Rotating the "Step" knob from left-to-right will increase the gain by the following:
1 is X 18 db
2 is X 23 db
3 is X 28 db
4 is X 33 db
5 is X 39 db

2. Equalizer / Tone Control (BLUE)
The tone control section is a highly modified Baxandall type that is tuned for less control interaction and more boost/cut capability.  The center frequencies are Treble 10kHz, Middle 1kHz, and Bass 120Hz, with +/- 17dB of control.

3. Highpass Filter (YELLOW)
The Highpass spans from 60Hz to 800Hz with a 6dB per octave slope. This control allows you to only let high frequencies pass. In return you will find a vast palet of tones that sit perfect and inspire textures that you have never heard from your rig. The toggle switch will turn the Highpass on or off.

In and Out Jacks
You will notice that in addition to the normal 1/4" instrument input/output found on a guitar pedal, we added an XLR input and output so that The Colour Box can be used as a vocal, bass, acoustic, or keyboard preamp live or in the studio. The 1/4" mono output and the XLR output are independent and allow you to run parallel outputs to two destinations. For example, run the 1/4" mono out into your guitar amplifier and at the same time run the XLR output to your front-of-house mixing board. Another example of using parallel outputs would be to track amp tones and the "direct in" sound of your performance onto two separate tracks. We achieved the parallel output by way of a discrete shunt-feedback circuit.

Power
The Colour Box runs on 18v DC negative center power. We supply an adapter but you can also use any standard 18v DC pedal power supply or voltage doubling cable like the Voodoo Lab found here: https://www.voodoolab.com/shop/index.php?cPath=22_24_32.

Never before has a guitar pedal crossed into this territory to bring the tones of pro audio to your pedal board.

*The word/name Neve® is a registered trademark of AMS Neve ltd.
The JHS Colour Box pedal is in no way affiliated with AMS Neve ltd.