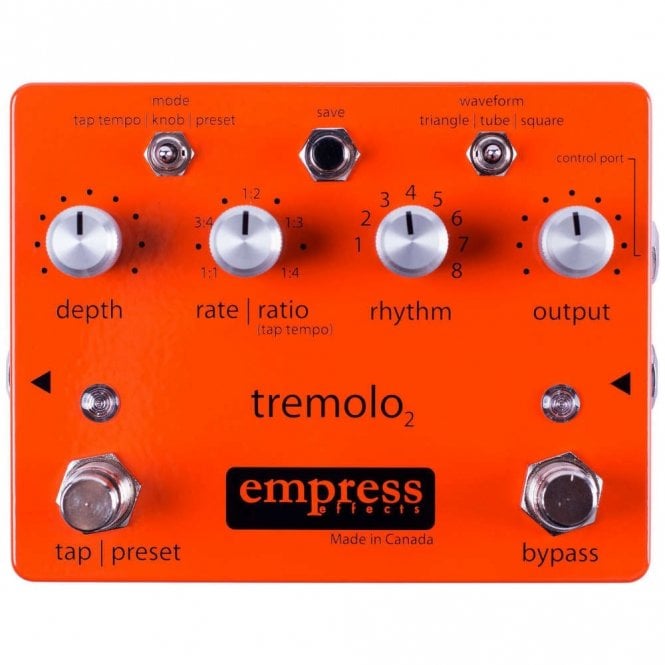 The Empress Tap Tremolo is another original design from Empress Pedals. The signal path is analog but under digital opto control.

Pristine Sound - The Empress Tap Tremolo Pedal has to be heard to be believed. It's whisper quiet and free from the "LFO throb" usually associated with tremolos. We dare anyone to find a better sounding tremolo.

Waveform Selection - You can modulate your sound with three different waveforms. An asymmetrical tremolo was modelled after a '65 Fender Vibrolux (brown face) to give you the fullest tremolo sound possible. A square wave can be utilized if you're after a harder sound. And if you're looking for a more normal tremolo, you can use the triangle wave setting.

Tap Tempo - The Empress Tap Tremolo Pedal averages your last four taps so it plays in sync with your music. You can also choose different tap to tremolo rate ratios. 1:1, 1:2, and 1:4 are available.

Two Speed Mode - An exclusive feature to the Empress Trem. You're able to set two different rates, and switch between them using the tap tempo stompswitch. This is similar to playing through a Leslie cabinet and changing the speed.

Rhythms - Another exclusive feature. The Empress Trem will definiately do your run-of-the-mill tremolo sound to a tee. But you can also set it to play different rhythms. Check out the soundclips for examples.

Gain - A problem with most tremolos on the market is that when they're engaged, you hear a noticeable drop in volume. The Empress Trem solves this by having a gain stage on the output. It's able to deliver up to 6dB of gain without adding any distortion to the signal.

True Bypass - The Empress Trem employs true bypass, so you can be sure that it's not affecting the signal when disengaged.

Perfect Size - The enclosure measures approximately 4.5" by 3.5" by 1.5", which is delightfully small when considering all the features packed into this unit.