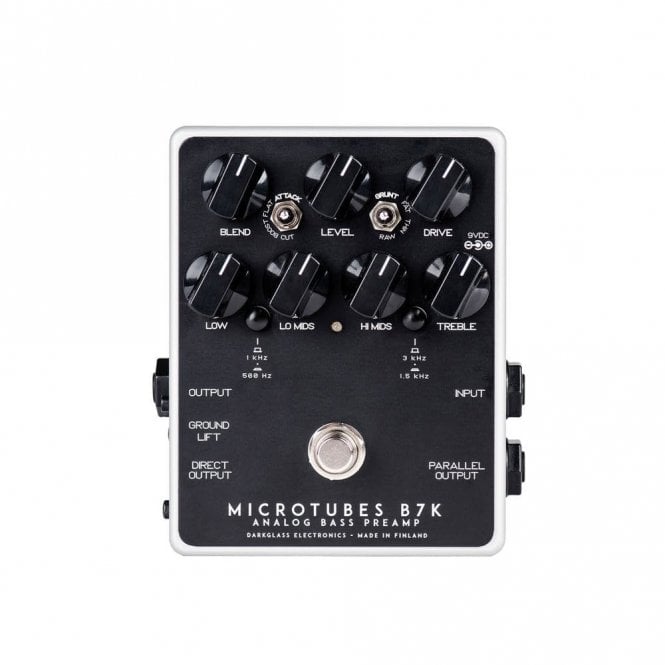 Here's What Darkglass Have To Say About the B7K V2:

Tone crushing overdrive and super transparent modern sound is the essence of the B7K. One of the most acclaimed Darkglass pedals in the bass community, it doesn’t compromise the original sound of the instrument, but enhances its presence in the mix. B7K takes the powerful dynamic saturation circuit from the simple B3K CMOS Bass Drive pedal and then adds a 4-band active EQ, parallel output and balanced line driver for even greater versatility.

However, after being at the top of the field for nearly 7 years, Darkglass thought the time had come to implement some of the engineering tricks they have learned in their journey to give this much-loved pedal the upgrade it deserved. So, with the Microtubes B7K V2 you get all the features of the original, with the ability to even better sculpt your tone.

Designed for both studio and live use, the Microtubes B7K V2 will take your direct sound to a whole new level. Jon Stockman of 'Karnivool' uses this pedal for some preamp gain and boost.

The character and core of the Microtubes B7K V2 though remains exactly the same, still retaining the powerful dynamic saturation circuit, EQ and the balanced line driver as the original. Darkglass wanted to simply add some very useful features for tone shaping on the V2 model: