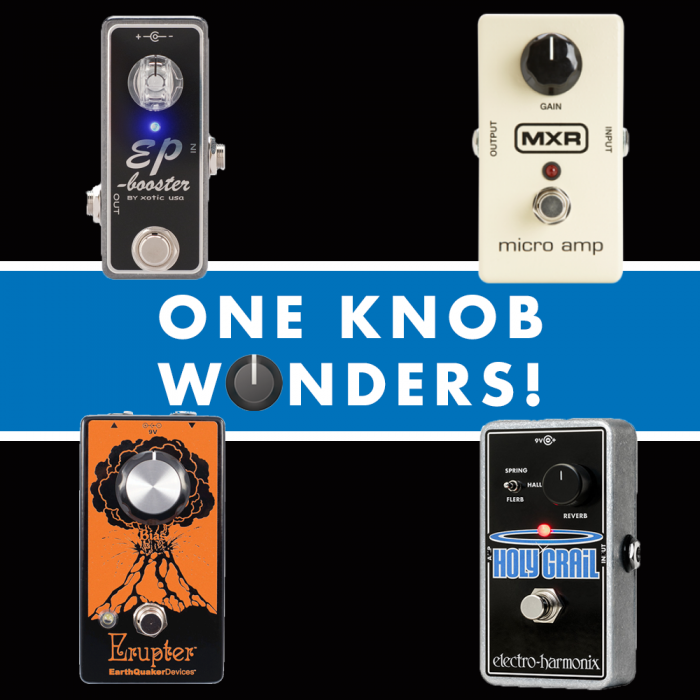 Sometimes you don’t want to be over faced with choice and the order of the day is a swift dive in at the deep end. While it’s always nice to be able to pick from an infinite choice of tones and settings, occasionally you have a sound in your head that you want to get to as quickly as possible. That’s where single-knob guitar pedals can have the edge over multi-control effects. In this post, we will look at some of the most interesting options available.

When a pedal looks and sounds this good, you know you’re on to a winner. This single-knob fuzz pedal from EarthQuaker Devices uses a buffered input to deliver a smooth signal at all settings, the sole control acting as a bias adjuster to provide plenty of harmonics and presence. Ideal for those who want to spend more time playing and less time tinkering.

This classic pedal from Dunlop’s MXR range has been spotted on many a pedalboard, providing an answer to the problem of long signal chains and multiple effects pedals. The epitome of clean boost, it comes with a rubber cover that slips over the control knob, allowing easy changes to the gain setting with a brush of the foot.

Exotic Pedals have quite a few options when it comes to single knob pedals (see Super Sweet & Super Clean), but the EP Booster comes with an interesting backstory. Jimmy Page, Eddie Van Halen and Eric Johnson all used an Echoplex EP-3 as a pre-amp to form part of their legendary tones, and it’s that pedal that provides the inspiration here. By utilising a discrete FET design and low impedance output, the EP Booster provides up to +20dB of clean boost, driving any amp it’s put in front of.

Simplicity and a picture of a rabbit coming out of a hat. What more could you want? JHS‘ offering, the Prestige Buffer Boost pedal, carries on from where their Mr Magic pedal left off. Depending on where you position the boost knob, the pedal can take on any role – from a simple buffer to maintain the signal in a long signal chain, to a lead boost for solos, all the way to overdrive and beyond. At its highest setting, the Prestige creates a rich sustain and a natural amp breakup, pleasing the ears of tone enthusiasts everywhere.

Like its stablemate, the Erupter, the Acapulco Gold features classic EarthQuaker Devices styling and single knob ease-of-use. Based on the power section of a cranked vintage Sunn Model T, it’s a distortion pedal that strives for quality over quantity when it comes to onboard options, ideal for those who like to use their guitar’s controls to shape the finished sound.

The Electro Harmonix Holy Grail Nano provides fantastic reverb sounds as soon as it’s turned on, allowing the user to switch between Spring, Hall and Flerb settings with the flick of a switch, while its brother the Neo swaps out the Flerb setting for the more traditional ‘Plate’. On the Nano, the Flerb setting in question combines a traditional reverb with flanger to create a unique sound that gives a new twist to an old favourite.

Familiar to anyone that’s ever listened to surf rock, or countless songs recorded with the use of a classic Fender Deluxe Reverb, this pedal from Rockett is designed for touring musicians that want such a sound without all the bells and whistles. Allowing the player to simply have more or less of the one thing it does very well, the large knob also lends itself to foot-operated changes mid-set.

Wampler are renowned for making high-quality pedals, and the Decibel Plus is no exception. The option to operate the buffer independently from the boost via the onboard switch is invaluable in situations where a bit more signal is called for i.e. expansive pedalboards and long guitar leads, eliminating the problem of ‘tone-suck’ in such situations.

Full-size funk in a fun-sized package, the signature wah sound can now be had without the requisite rocking motion, thanks to the Doctor Q envelope filter from Electro Harmonix. It responds particularly well to how much a player digs in with the pick, and the finished sound can be complemented with a bass boost courtesy of the built-in switch.

For those that feel a brain fog descend every time they try to come to grips with a new pedal and the endlessly-changeable combinations of knobs and sliders, single knob pedals can be a welcome change. Sometimes you want a pedal to do its thing really well and, in turn, simply be able to choose more or less of that great thing. The selection above represent a mere handful of the options available, but hopefully next time you’re starting down the pedal path once again, you’ll bear in mind that less can sometimes be more.