How To Arrange Your Pedalboard

Solutions for your Signal Chain

Effects pedals offer a new world of possibilities to guitarists. Since the very first tremolo effects unit came around in the 1940s, the pedal buzz has grown and grown into what is now arguably the golden age of pedals and effects. There are so many great companies pushing the boundaries of stompbox technology that one is often spoilt for choice. However, some things have remained a constant, and signal chain order is one of those. Time for a small disclaimer: there is no right or wrong way to chain your pedals together, the following is just the ‘normal’ setup and is widely accepted as a standard signal flow. We’ll take a look at some other options as well outside of this, with a view to finding some different sounds and applications for certain pedals. So how should you set up your pedalboard? Let’s dive straight in…

The diagram below shows what most guitarists would consider a standard pedalboard setup. 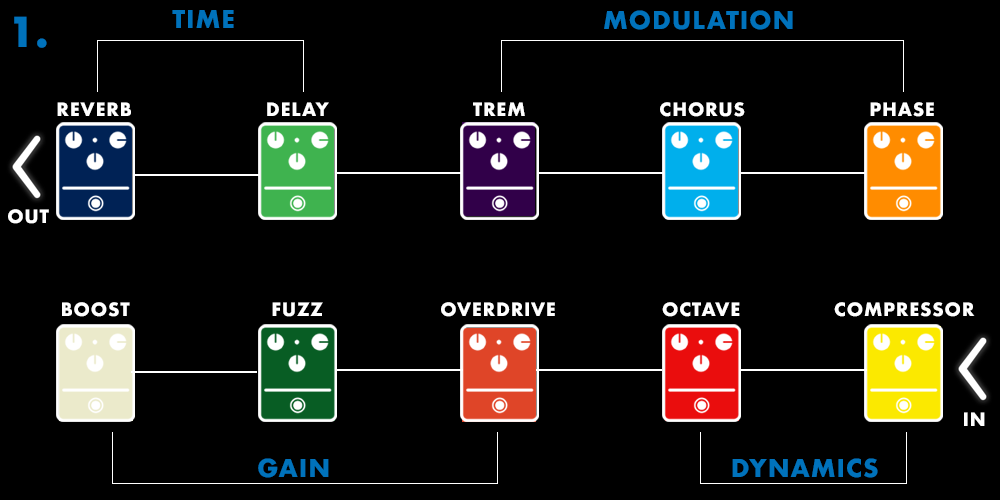 Here we have divided the pedals into 4 groups so that your board runs in the following order:

Of course, there are certain things which are down to each player’s preference. For example, Volume pedals could be used right at the start to clip the initial signal coming from the guitar. Because it is before the Gain section it will reduce the guitar’s signal and clean up the dirty pedals, exactly like rolling back the volume knob on your guitar. Alternatively, if placed right at the end of the chain – after the Gain section – it will maintain the overall sound and change purely the volume of the board. 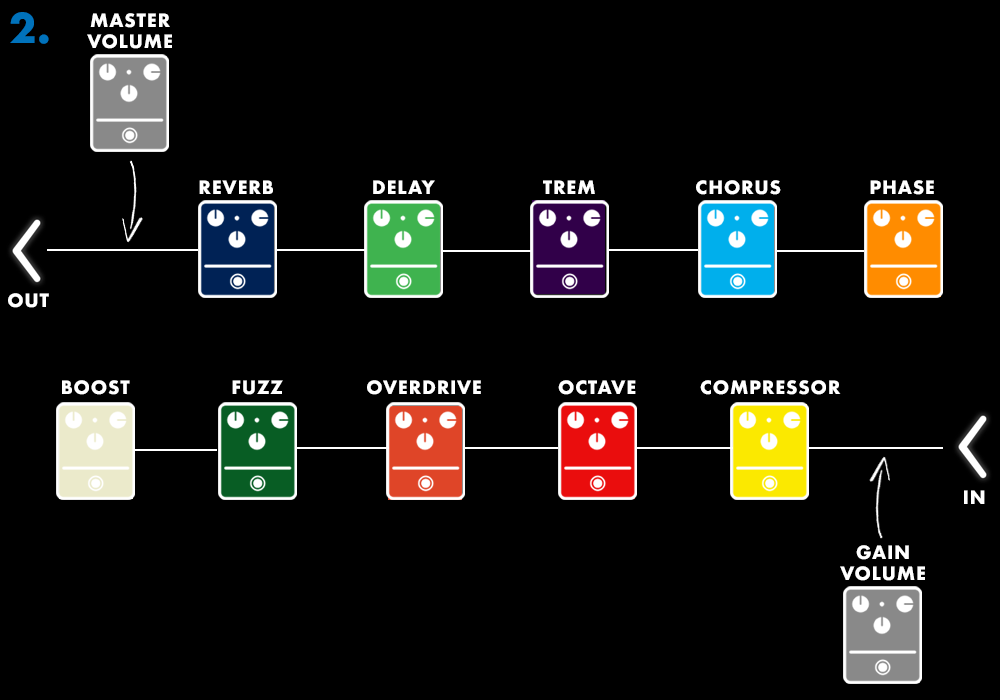 Another area that is completely subjective if you use more than one Gain pedal is the order within this section. For example, if you use fuzz and an overdrive pedal, switching the order of these will produce different sounds. Running a cranked fuzz into a moderate overdrive will give the fuzz more of a boost than changing the tone too much. Crank up the gain on the OD too and you’ll enter a world of distorted noise… not that that’s a bad thing. Boost pedals are also great to experiment with before and after drives and fuzzes.

Let’s look at some other types of pedals that crop up on people’s boards.

Tuner: The single most important pedal on any board. Usually, this would go right at the start of the chain so that it gets your unfiltered guitar signal, and avoids any added harmonics or wobbliness that may be induced from your Gain and Modulation pedals.

Wah: Often a personal preference. The most widely used placement is near the start, before drives. If you run a compressor, it may be worth trying the wah before and after as well to see how it affects your tone. Some people like it after drives as more of a filter tool, while some put it right at the end.

EQ & Preamp: Equalizers are not tied down to any specific position, it depends on how you are using it. A common use is to have it affect your drive tone, so try moving it around within the Gain section of your board. Alternatively, near the start of the chain, it will affect your guitar’s clean signal. Preamps will likely be more at home near the start of your board.

Looper: An ever-popular pedal these days. Right at the end of the chain will mean that the looper will catch all your effects throughout each loop. For more experimental users, running it before an analog delay pedal or ambient reverb pedal and manipulating the loop could end in some serious fun.

Synth: Similarly to pitch effects, synths tend to be most stable when they are at the start of the chain taking a clean signal. Adding drives after though can lead to some great sounds.

The modulation-before-drive approach would recreate the sound of putting pedals into a driven amp rather than a clean amp. One of the best examples would be Eddie Van Halen’s use of his MXR Phase 90 into a distorted Marshall. Chorus is also an effect that has been commonly placed before drive in a signal chain, more as a tone-thickener than a full modulating chorus sound – think rock and metal from the 1980s with the rich, high gain tones. Mods before drives will likely create more unwanted noise when activated, but you may find something that catches your ear.

Trip Out With Tremolo

Lots more can be done with tremolo than you might first think. Putting it before delay and reverb will mean that the tremolo is only affecting your ‘dry’ tone, and the delays and reverbs may sound like they’re running wild. Try first placing your tremolo in between (after delay, before reverb) to see how the delays are now kept in with your dry tone, and the reverb is still adding a nice overall shimmer on top. Alternatively, use your trem after both delay and reverb to affect the whole chain, and bring your overall sound in and out of volume. Another trick for tremolo is to have two going at once – particularly effective with a twin-amp setup. Set one fast and one slow for a swirling, swooshing sonic experiment.

…Or perhaps not. The order of compression and boost pedals in relation to your drives will have a big effect on your dirty tone. Compressors do usually like to be early in the chain so that they can boost your nice clean guitar signal, but that’s not to say you can’t try it somewhere else. Same with boosts, swapping these in and out between your drive pedals will boost different pedals in different ways. If you’re running a couple of drives, try switching the order of these too. Who knows what will happen, but there’s only one way to find out.

So there we have it, a quick guide to setting up your optimal pedalboard signal chain. While there is a ‘generally accepted’ signal path, the moral of the story is to experiment away until you’re happy with your sound.