OUR ONLINE STORE IS OPEN Click here for info on the re-opening of our store
Sound Affects PremierListsEight Of The Best Overdrive Pedals
Menu
Lists, Reviews

Eight Of The Best Overdrive Pedals 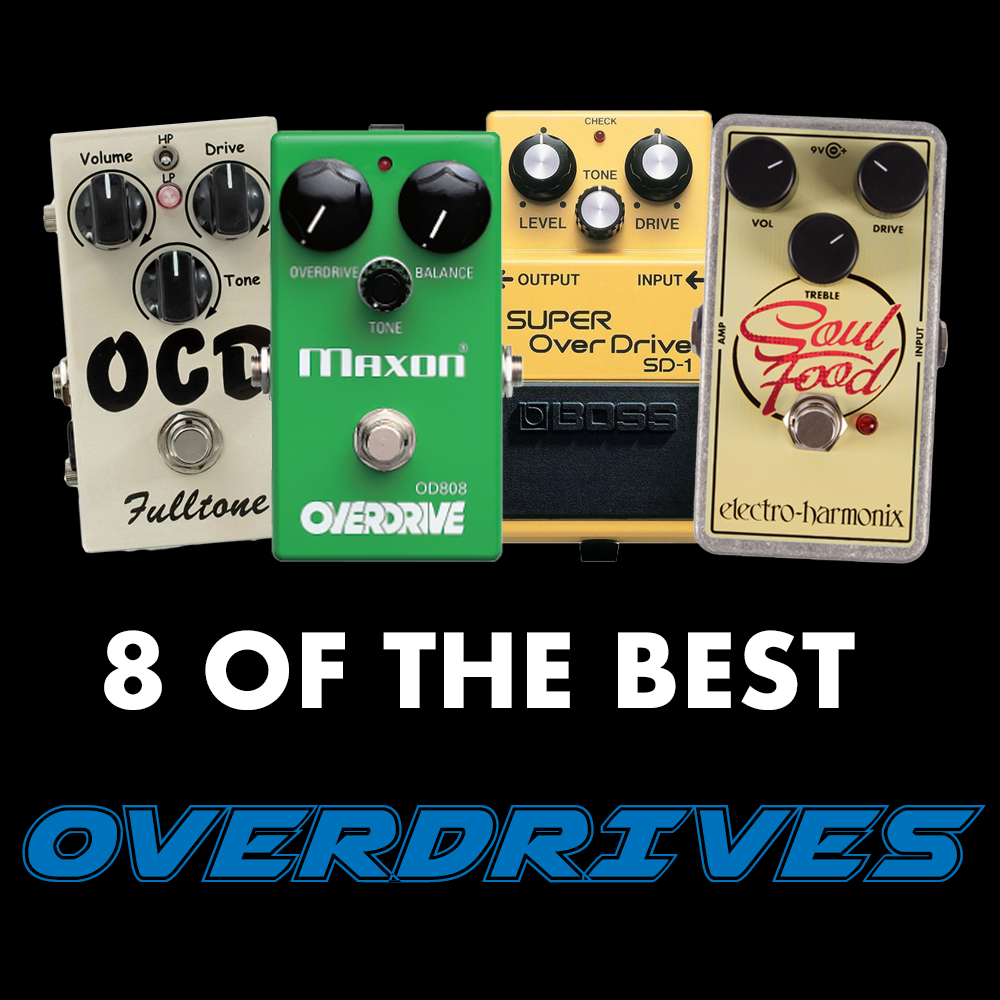 Overdrives. There are hundreds. But which have risen to the top like tone-shaping croutons in an otherwise confusing bowl of soup? Some classics have maintained a presence in the Google searches of new guitarists everywhere, while new models nip at the heels of these pedalboard stalwarts. Here we will take a look at both and hopefully clear a path through the undergrowth.

Both a favourite of reviewers and players alike, the Fulltone OCD has become one of the most popular overdrive pedals on the market. Contrary to the numerous Tubescreamer clones currently out there, Fulltone have forged their own path and reaped the rewards by manufacturing a pedal with increased touch-sensitivity and no loss of signal/tone thanks to the trademarked “Enhanced Bypass”.

The original Klon Centaur ceased production in the early 90s, with many pedal manufacturers flocking to fill the void. Electro-Harmonix has become renowned for great pedals that don’t break the bank, and the award-winning Soul Food is no exception.

The Tubescreamer name is synonymous with overdrive, played by countless big names over the years. While the Maxon name will be known to many, the link between the two brands may be less so. Japanese company Maxon originally produced the Tubescreamer pedals for Ibanez, before branching out on their own.

The phrase “built like a tank” comes up in nearly every forum that ever features a Boss pedal, and for good reason. Their sturdy chassis is the signature of a range that rough-stompers and Michael Flatley fans will love, and the OD-3 is no exception. Featuring a transparent yet warm overdrive, this pedal would be a solid addition to any gigging board.

While there are countless variations on the Tubescreamer circuit, pedals like the Morning Glory from JHS have strived to create a ‘transparent’ overdrive that boosts your natural guitar tone without adding the former’s characteristic mid-hump to the final sound. Created in 2009, it is famous for responding to a player’s touch and is one of the company’s most popular pedals to date.

Similar to the OD-3 but with a smoother sound and a slightly greater colouring of tone, the Boss SD-1 features the same easy-to-use controls and rugged construction as the rest of the stompbox range. Blues aficionados will love its warm tone and tube-like overdrive, created thanks to Boss’ unique asymmetric clipping circuitry.

The original Gold Klon Centaur featured two unmarked diodes that other brands found impossible to identify, therefore making the circuit nigh-on impossible to replicate perfectly. However, the team at Rockett found out what they were using and sourced the same components to build their own version of the legendary pedal. The gold Ikon version can sound a bit smoother than its silver counterpart, so it’s definitely worth checking both out.

Not all Klon clones are born equal. Wampler‘s own take on an oft-imitated design features more control than both the original Tumnus and a lot of the competition, with three dedicated tone controls for a more malleable EQ. The Normal/Hot switch is a new addition too, allowing the user to move from original levels of gain to higher gain territory.

Of course this list is far from exhaustive, and there are many, many more overdrive pedals to choose from, all with their own strengths and individual quirks. Let us know if you have any different thoughts in the comment section below!