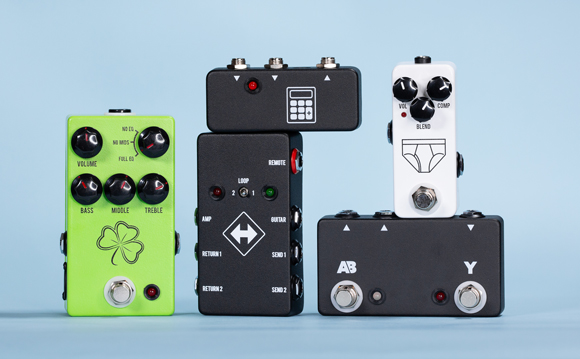 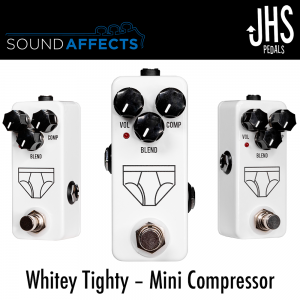 JHS Pedals is proud to present the Whitey Tighty compressor, their take on the classic effect that no one may ever know is on, but when it’s off you feel like your pants are down.

The Whitey Tighty is as simple as it gets while never getting in the way. At only 1”x3”, you’ll save so much space on your pedal board that you’ll be able to add to your wardrobe of effects with ease. And with the ability to blend in compression and clean signal, you’ll be able to dial in the perfect sound that keeps everything in place.

The Whitey Tighty is a FET compressor that has three simple controls: Volume, Compression, and Blend. The Volume control gives you the ability to set your volume at unity gain or slightly boosted to make up for any perceived loss from the compression. The Compression knob controls the amount of compression for everything from a subtle smoothing of your tone to a pleasing squash that’s perfect for country, blues, pop, and rock. Use the Blend knob to dial in the right amount of clean tone along with your compressed signal. This allows you to retain some of the natural feel of your clean tone while giving you the studio-quality compression that brings your sound to the next level.

Tighten up your tone with the JHS Pedals Whitey Tighty! 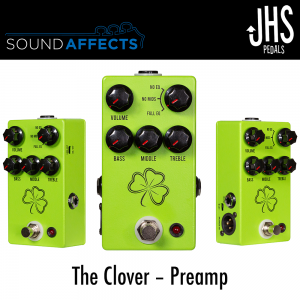 In early 1984 BOSS released two strange new devices under the name “The Pocket Series”. One of those devices was the FA-1 FET Preamp and it quickly found its rightful place among the legends of tone when The Edge of U2 used it on the recording of “Unforgettable Fire” as well as placing it in his following touring rigs. The Clover Preamp/Boost is our faithful interpretation of the FA-1 but with several additional features that we believe make this amazing circuit even better. You won’t want to be without your lucky tone-shaper at any gig!

The Clover has four standard controls and one rotary switch on the top. The Volume control allows you to set your volume at unity or as a boost to push your amp or dirt pedals. There are three EQ controls to give you tons of control to cut or boost Bass, Mids, and Treble. The rotary switch has three settings: Full EQ, No Mid, and No EQ. When set to Full EQ all three EQ controls are in operation, giving you full control over the full range of EQ available. The No Mid setting is an exact replica of the original FA-1, removing the ability to control the Mids and leaving them in a fixed setting. When in the No EQ mode all the EQ settings are removed and the Clover becomes a straight FET boost, perfect for pushing an amp. On the right side of the pedal there is a Low Cut dip switch. This removes some of the lows if you feel your tone is too muddy and can help you cut through a mix.

In addition to the standard 1/4” input and output, the Clover has an XLR output for using as an acoustic or bass preamp. These can be used individually or simultaneously if you want to go to a soundboard or interface as well as an amplifier. The XLR output was designed with acoustic and bass players in mind as the Clover is a wonderful preamp that gives you a great amount of control over your sound. There is also a ground lift if you experience some hum when using the XLR output.

The Clover is an end all preamplifier/boost circuit for any electric, acoustic, or bass player. The EQ is simple, powerful and doesn’t allow a bad sound. No matter what style of music you play or amp that you use, the Clover will prove to be an indispensable tool. While the Clover excels at being a preamp/boost for dirt pedals, the magic is in pushing your tube amplifier into natural overdrive. The EQ lets you hit the exact spot that your amp is naturally prone to give in at. Push your small wattage amp into natural rich overdrive and distortion or find sounds in your larger more powerful wattage amp that you have never heard before. Strat and Tele players can use the Clover to create extra punch, depth and dynamics that single coil pickups can’t normally achieve, while Les Paul and humbucker players can find clarity, bite and definition galore! From country, rock, metal and even acoustic… The Clover covers every base. Find your unforgettable tone with the luck of the Clover! 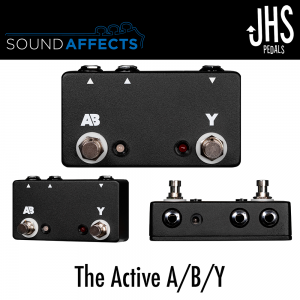 The JHS Pedals Active A/B/Y is the perfect solution when you need to send one signal to two outputs with the ability to choose either output (or both) on the fly.

Just plug in your instrument cable (or patch cable) into the input, then use the outputs to send a signal to any combination of amplifiers, interfaces, mixing board, or anywhere else you want to send your signal. Once hooked up, use the left footswitch to select between A and B channels. When the LED is red, the A channel is engaged. When the LED is green, the B channel is engaged. Hit the right “Y” footswitch, and BOTH channels are engaged for full stereo output. Because the Active A/B/Y has an output transformer on one of the outputs, there is no need for a ground lift as the transformer eliminates any hum.

With an output transformer, FET transistors for completely silent switching, the capability to use one or both outputs simultaneously, the JHS Pedals Active A/B/Y will be the one pedal that you can never leave home without! 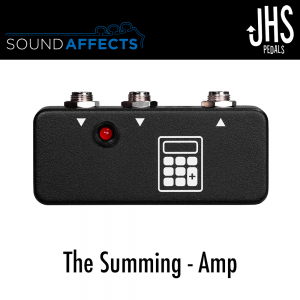 The JHS Pedals Summing Amp gives you the ability to take two inputs and blend them into one output. Simply plug into the two marked inputs and then plug in your single output and you’re ready to go. From two signals the Summing Amp creates one mono signal.

This is perfect for putting effects in parallel so that they are not affected by one another. The Edge used this technique in the 80s with his delays. When you have a quarter note delay and a dotted eighth delay and you place them in parallel then sum them back together, the effect is that both delays come through more clearly and are not “delaying the delays”. This can also be used with overdrives so that they are not pushing each other as in series, but sit atop one another in parallel. Another use is combining fuzz and compression in parallel so the fuzz isn’t getting choked by the compression.

The Summing Amp gives you the ability to use effects together in completely new ways that you may never have imagined and can open up new and inspiring sounds with your old effects. This simple little box takes two inputs and creates one output but it adds up to a whole lot more! 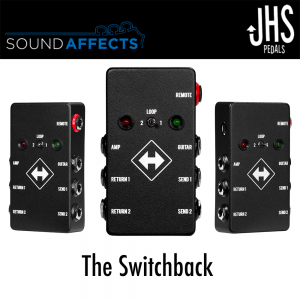 The JHS Pedals Switchback is a small unassuming box with a massive feature set. It began its life as a device that we designed just for ourselves to test and compare pedals in the JHS workshop but we soon realized that it was extremely useful for everyone’s guitar rig on stage or in the studio.

The Switchback has one input, one output and two separate selectable effects loops (Send/Return), plus an A/B toggle that is controllable by our Red Remote switching system. The foot-switch is 100% true bypass, so when it’s off, it’s not affecting your signal in any way. There are millions of ways to use the Switchback (Maybe not a million but… You get the idea) but here are a few of our favourite applications that are incredibly useful!

Place a pedal or chain of pedals in the first loop and place a different pedal or chain of pedals in the second loop. The toggle/red remote will allow you to quickly switch between those two loops. This is great for instantly placing different effects chains in and out of your rig on the fly or for shooting out two pedals with zero dead time in-between playing… Find out if that old TS808 sounds better than your TS-9. If you demo different pedals, this is a must-have.

Place your pedal or chain of pedals that you want in the first loop. The toggle/Red Remote will now toggle between the loop with your effects and the clean bypass signal. There’s no need to bridge the second loop with a patch cable as the Switchback automatically bypasses any loop where there’s nothing plugged into the jack.

Simply use Send 1 and Send 2 to go to two different amps or any other application where you need two switchable outputs, and don’t use the output. Again, using the Red Remote gives you the ability to switch on the fly while playing!

Use Send 1 to channel one and Send 2 to channel two. This allows you to “channel switch” on any amp with multiple inputs like old Marshalls and Fenders!

Plug your amp’s effects loop Send into the input and the amps return into the output. Then toggle between the two loops of the Switchback as in example #1 above.

Because of the red remote function, you can place the Switchback and any effects in its loops completely out of sight under your pedalboard or in a rack while only having the small 1×1” Red Remote accessible!

The Switchback could become an essential utility in your touring rig or studio, helping you solve many switching puzzles with your rig. So grab a Switchback and get to climbing!