One of the most innovative and interesting pedals to come out at NAMM 2018. JHS have absolutely knocked it out the park with this one. Following on from their own pedal released in 2015 called the Muffuletta -which packed six different Fuzz circuits into one pedal- the Bonsai packs nine (yes nine!) different classic Tube Screamers into one unit. 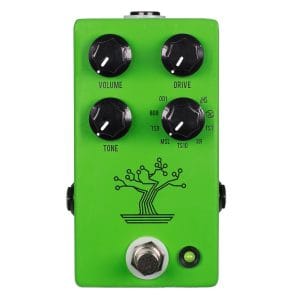 With just a simple rotary dial on the bottom right, you can switch between nine unique circuits that conjure up various vintage, one of a kind or downright rare Tube Screamers. This was no mean feat, it took JHS three years of painstaking research and development to create this.

Josh Scott at JHS pedals didn’t just want to sound like the pedals each of the nine is based on. Oh no, he wanted to perfectly recreate them. To quote:

Let’s take a look at what pedals the Bonsai has hidden away inside:

BOSS OD-1 – 1977
An overall brighter and slightly higher gain mode that does not utilise the Tone knob. This mode also inverts signal just like the original and has symmetrical clipping. The OD-1 is magical at boosting other drives or amps into singing saturation.

Ibanez MSL, Power or L Series – 1985
Though metal is in the name, this sound doesn’t quite inspire the modern metal djent we think of.  Still it has a higher gain sound with a more low end and an overall more gooey feel.

Ibanez TS-10 – 1986
Made famous by John Mayer, this model is a slight upgrade from the TS9 for the late ’80s. Bluesy, crisp, more low end roll off and low gain.

Exar OD-1 1989
The EXAR is a Polish made TS-style pedal that has a slightly different drive character with a little more gain than the classic screamers as well as a slightly more transparent feel.

Ibanez TS-7 (+mode) – 1999
The hot mode on this version gives you the highest gain sound in the Bonsai. More low end and dirt fill out the tone to have you shredding away.

Keeley Mod Plus – 2002
Robert Keeley’s classic mod tightens up the tone on the original giving you smoother mid range and high frequencies, and increased bass response.

JHS Strong Mod – 2008
Our own mod we’ve been doing since 2008 is much cleaner and overall more powerful. The mode has more pronounced higher end and low end drop offs.

The Bonsai is released in March 2018, Pre Order here.