Chase Bliss have a very good habit of putting out some of the highest quality guitar pedals on the market today. This new update is no exception. Rather than giving it the name ‘Warped Vinyl mkiii’ to replace the now discontinued ‘mkii’ they felt this pedal differed enough to be called something new. Enter the Warped Vinyl HiFi Vibrato/Chorus Pedal. The HiFi part of the name comes from the quality of the sound produced. High fidelity equipment creates a sound that is as similar as possible to the original. Essentially meaning the quality is much higher than cheaper variations of similar products.

The Chase Bliss Warped Vinyl HiFi has some new features and controls to come with the new look of the chassis. The LAG knob creates very thick and lush chorus tones, there’s also a Hold function to give more creative control over the LFO and ramping. Finally there’s a tone dial to produce more of a shimmering sound. Acting more like a vibrato here than a chorus. This new Warped Vinyl is a lot less noisy than its predecessor, with a lot more headroom. Quite the improvement on what was already a stand out pedal. 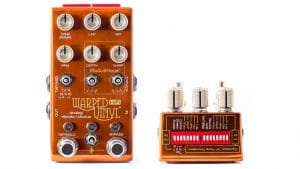 This fantastic update functions in much the same way as the rest of the Chase Bliss range. All analogue tone, with a digital brain controlling the dials and dip switches giving yet more control and finesse over your tone. Whilst unapologetically complex, they make some of the highest quality, versatile stompboxes money can buy and the packaging is unrivalled by any other boutique pedal manufacturer out there.

Check this amazing pedal out here