Initially teased in February 2017 by a sneaky picture on his Instagram (below), the guitar/vocal powerhouse has finally released his long awaited new signature amplifier and boy is it cool! 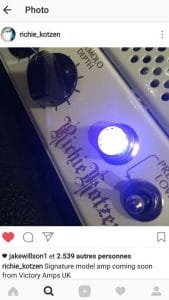 The Victory RK50 came about through Richie’s longstanding friendship with Victory Amplifier Designer Martin Kidd (who originally designed Richie’s old Cornford Signature Amp way back when) and it packs lots of cool features. From in-built Tremolo to a Speaker Dampening for better Bass, this amplifier is a versatile, single channel game changer.

It will be available in a compact Head and practical Combo format. Both will have a switch to drop the wattage from 50W to 9W, making it perfectly suitable for the bedroom or the stage. 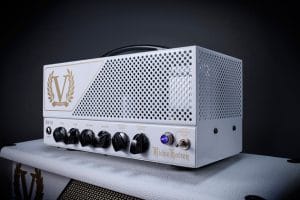 Richie Kotzen’s tone is very recognisable, so this amp had some big boots to fill in order to deliver the saturated gain and clarity needed to handle Kotzen’s incredible, plectrum-less speed. If you prefer El34’s or 6L6 valves, there’s a bias switch were you can go between the two. The single tone knob gives simple control over the EQ section and the footswitchable boost feature proves useful for solos and those times when you want to be heard more in the mix. Long story very short, this amp is everything Richie needs and whether you can play like Richie or not, this amp can be everything you need too.

Here’s the lowdown on what this amp can do:

The lunchbox amplifier head will be available in store and online very soon, click below to read more about it.