I’m sure at one point in our lives, we have all sat and pondered over what it must be like to be Paul McCartney, and play bass with The Beatles. What must it be like to have all that money and fame?

Well for one man named David May that could have quite easily been his life.

As a young man in his 20’s, David had the opportunity to play bass alongside his friend’s, John Lennon and Stuart Sutcliffe who he studied art with at university in Liverpool.

This is his story, told for the first time on camera, unedited here at Sound Affects Premier.

David explains how he has been in a few bands, but the first one he formed was Ken Dallas and the Silhouettes back in 1957, which progressed to Mark Peters and the Silhouettes, who he then toured with extensively. They also played alongside The Beatles upon their return from Germany.

After having been in and out of multiple bands throughout the 60’s, David then joined a cabaret act called The Madison’s that he was with for 38 years, retiring in 2007 at the age of 65.

It all went quiet for 3 years until an old friend, Derek Banks, convinced David to reform the Silhouettes under the new name Ricky Gleeson and the Silhouettes. Unfortunately Derek had to retire due to a heart attack. David now plays with various musicians in a band simply called The Silhouettes. 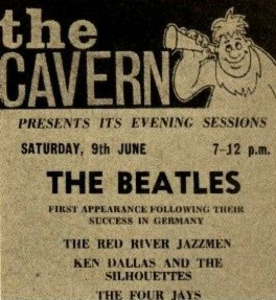 Casting his mind back to the 50’s, David describes how John Lennon approached him and asked if he wanted to join his band, (then called the Silver Beatles) because they were going to Germany and they needed a bassist. However, at the time, David was listening to The Shadows and Buddy Holly, so when he showed up to rehearsals with John Lennon, he thought they were awful. The Beatles at the time were really heavily into their rhythm and blues, listening to the likes of John Lee Hooker, which was alien to David. He goes on to explain that it is funny to look back on, because this is a genre he listens to now and loves with a passion. He also explains how he didn’t really want to go to Germany. With all that considered, David decided to reject the offer to join their band.

Instead, David made a deal with John Lennon to let him come and measure the bass guitar that the university had loaned them, as he was trying to make his own. In return, he would teach Stuart Sutcliffe how to play the bass.

So off they went to Germany and 6 months later, David’s band Ken Dallas and the Silhouettes were on a bill supporting The Beatles.

David describes how much they had improved since being in Germany and that even just talking about it makes the hairs on the back of his neck stand up to this day.

David, understandably, always gets asked if he regrets not joining the band. His answer is perfect. Simply put…No. He says:

“I’ve had a good life, I’ve been in good bands, I’m in a good band now and I can walk around the streets without getting mobbed. I’m alive and two of the Beatles aren’t, which is a shame. People always ask about the money, but then again, money doesn’t buy health.”

Here at Sound Affects, we feel humbled that David chose to tell us his story for the first time on camera and hope that you enjoy his story too.