Firstly and simply, we have the Faves – a simple MIDI controller that allows for 6 presets to be accessed on the fly.

Perfect for adding some presets to your Chase Bliss pedals, without lugging around a bulky MIDI controller. But to more interesting pastures….

A first for Chase Bliss – not a modulation pedal!

Designed with the team at Resonant Electronic, the Brothers is actually six different boost/drive/fuzz circuits, which can then be mixed in 33 different ways, including a parallel mix and changing the order of the effects, as well as the ability to save a couple pre-sets on-board and many more with MIDI (so, maybe to have a dual drive, with one side of the pedal providing some fuzzy low-end while a drive works the mids; then kick on your Faves, clean the lows up, and turn one side of the pedal into a clean boost to drive an amp for a solo. Perhaps boost a fuzz into an amp to hit the front end hard, then flip the order for some hard compression – the possibilities are endless! Well, not endless. 33 different ways. It is quite a lot though!). Check it out on the Chase Bliss site here 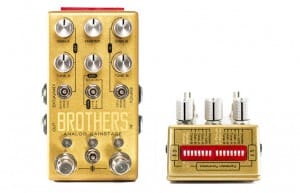 Here’s an interesting one. The Iconoclast is a stereo speaker emulator with a parametric EQ – Lows control the size of the virtual cab, Mids change the way the ‘speaker’ reacts to the ‘amp’, while Highs affect the cut-off, to emulate a wide range of cabs and speaker type. 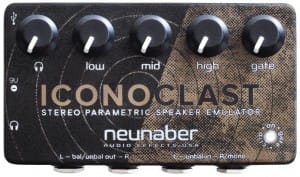 With high headroom stereo inputs/outputs, that can be used either balanced or unbalanced, the Iconoclast is designed to be placed after almost any pre-amp or pedal setup without introducing any undue clipping. It also has a headphone out, for quiet practice, and handily a built-in gate to clean the input signal up a little bit.

The dual outputs mean that yes, you can output directly from your pedalboard to a mixer, powered speakers, or an interface – and in stereo as well! All it requires is 9V, though it can use 12V as well.

The Iconoclast also has access to Neunaber’s ‘Iconoclast Software’ that allows further customisation of its EQ and stereo enhancement. View the Iconoclast as described by Neunaber here