After working with players such as Guthrie Govan, guitarists have got a lot of great gear to look forward to this year (try saying that three times fast). Especially now that Victory are adding two new amps into their roster.

Introducing the V40 Deluxe and the V130 Super Countess: 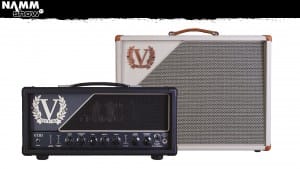 The V40 Deluxe heads Victory’s brand new heritage series and expands the previous V40 from being just an amp head into the full combo amp. This amp is packed full of effects ranging from Reverb, Tone and Level controls and best of all… Tube driven Tremolo. Packed with a pair of 6L6 tubes making the musical magic happen players can get a wide range of tones from this little amp. Grasping the full scope from American to British sounds. What more can you ask for?

Now onto the big guns. The V130 is the much bigger brother to the best selling V30 amp and packs a lot more punch (an extra 70 watts to be precise). This 100 watt head has a lot of headroom (making it the perfect match for pedals) and can access a wide range of sounds with it’s two channels. Starting with clean which has a crunch dial to get those twangy blues sounds and moving to the overdrive which can go from mild grit to screaming distortion. A rockers paradise.

Both of these amps are amazing musical creations with plenty of potential. No matter what you play, these amps can take it.

Watch the Victory amplifier page closely as demonstrations will appear over the coming days.