With vintage gear becoming increasingly sought after, Roland have definitely took notice and decided to give the gear addicts what they want. Boasting portability, authentic sound re-creation and MIDI compatibility the Roland Boutique sound modules will fit perfectly into your setup.

The Roland Boutique line is a series of limited-edition modules that faithfully recreates some of Roland’s most legendary synths. With highly-authentic sound reproduction, they’re also extremely portable, with a built-in speaker and battery operation for making music whenever—and wherever—you want.

Here is the line up… 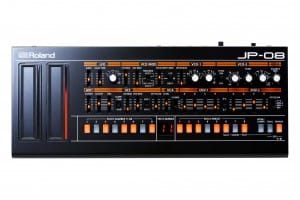 The Jupiter-8 is perhaps the most beloved of Roland’s synthesizers. Introduced in 1981, the 8-voice, analog powerhouse was a revelation to use, with an abundance of controls on the front panel. Most parameters had a dedicated controller which encouraged musicians to experiment, unleashing a sonic revolution that helped define the sound of the 1980s. The powerful synth engine was highly flexible with discrete analog circuitry able to create everything from majestic, ethereal pads to the punchiest lead sounds – especially when all 16 oscillators were stacked up in unison mode. Although only produced for a few years, the true legacy of the Jupiter-8 can be found through the people who used it. Even at the time, it graced the keyboard rigs of some of the world’s biggest bands and it quickly became the synth of choice when you needed a big sound for your record. Things became even more interesting after Roland stopped making the Jupiter-8. With the sound still in demand but only a limited number of synths in circulation, the Jupiter-8 became rare, expensive and highly covetable and the legacy of the Jupiter-8 is as strong now as it was over 30 years ago – and it still sounds amazing.

The legendary Jupiter-8 synth is back – as a limited-edition module no bigger than a book. Part of the Roland Boutique series, the JP-08 is all about hands-on control and that iconic Jupiter sound. With an array of 36 knobs and sliders from the original Jupiter-8 front panel, the 4-voice JP-08 is highly programmable and encourages sonic experimentation, especially with the built-in speaker and battery operation. Using Roland’s acclaimed Analog Circuit Behaviour (ACB) technology the JP-08 faithfully reproduces the original Jupiter-8 sounds and adds a few new twists in the form of extra LFOs and expanded VCO range. You can even slide the JP-08 into the optional K-25m keyboard unit for a self-contained, go-anywhere synth experience.

Click here to preorder and see the full JP-08 specs and features! 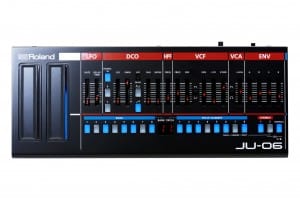 The Juno-106 was a 6-voice analog synth released in 1984, making it one of Roland’s first MIDI synths. The third in the Juno series, following the Juno-6 and Juno-60, some people consider the Juno-106 to be among the last great synths of the analog era; it was definitely among the last to feature many dedicated controllers and buttons for fast, easy programming. The 106 retained the warm analog signal path of its predecessors, including a silky-smooth 24db analog low pass filter. But since each voice was driven by its own digitally controlled oscillator (DCO), it was stable and reliable with super-sharp envelope generation. Musicians quickly adopted the versatile Juno-106, and it became (and remains to this day) a studio classic. Renowned for its pads, but also capable of punchy basses and searing leads, the Juno-106 can be heard on countless records and is a firm favourite within the house and techno genres. What’s more, its simple, hands-on nature made it ideal for learning about synthesis and how to create sounds from scratch.

The limited-edition JU-06 is an authentic recreation of the iconic Juno-106 synthesizer. Sometimes described as one of the last great synths of the analog era, the Juno-106 became a favourite thanks to its warm sounds and instant sound-shaping ability. The new 4-voice JU-06 module continues this approach, with 23 parameters controllable via the front panel and that classic Juno sound – complete with the much-loved Juno chorus effect. There are some new additions too, including a faster LFO and continuously variable hi-pass filter (HPF). You can even slide the JU-06 into the optional K-25m keyboard unit for a self-contained, go-anywhere synth experience.

Click here to preorder and see the full JU-06 specs and features! 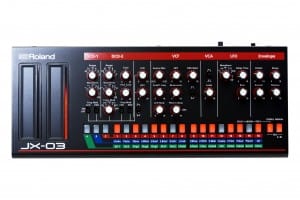 Introduced in 1983, the JX-3P was Roland’s first analog synth with MIDI. Sharing the 6-voice polyphony of its Juno stablemates, it also shared a variety of analog components including the classic Roland voltage-controlled filter (VCF). But the presence of two digitally controlled oscillators (DCOs) per voice gave the sound a distinctive, deep character that musicians loved – encompassing everything from big, sweeping pads to warm lead sounds bursting with personality. The 3P stood for Programmable Preset Polyphonic, meaning this was a synth designed for instant access to big sounds, with a straightforward button-driven user interface. However, the JX-3P was highly programmable – especially when used with the optional PG-200 controller which transformed the synth into a programming powerhouse by adding an array of rotary knobs for instant sound shaping and experimentation.

The Roland Boutique JX-03 module continues the legacy of the JX-3P synth. The original model was launched when button-driven interfaces were popular, so it was designed to give immediate access to preset sounds. It was actually highly programmable though, especially when used with the optional PG-200 controller that added 24 rotary knobs for instant sonic sculpting. The limited-edition 4-voice JX-03 inherits all 24 knobs from the PG-200, as well as the distinctive JX tonal character. We’ve also added some extras not present in the JX-3P including new waveforms, expanded DCO range and cross modulation options. You can even slide the JX-03 into the optional K-25m keyboard unit for a self-contained, go-anywhere synth experience.

Click here to preorder and see the full JX-03 specs and features! 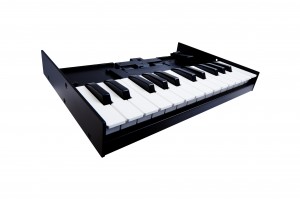 The K-25m is a 25-key, velocity sensitive keyboard designed for use with the Roland Boutique series. Measuring less than 12” across, the K-25m acts as a dock for any Roland Boutique module, and once in place the module can be tilted at two different angles for easier viewing and sound programming, or can be laid completely flat. The compact keyboard can also address a range from -4 to +5 octaves when used with the relevant module.

Click here to preorder and see the full KM-25 specs and features!