Orange have unveiled a new line of amplifiers at Namm 2015 following the success of their popular Crush series. From bedroom to rehearsal, guitarists of all levels will be able to enjoy that awesome Orange tone.

What Orange have to say…

Orange is proud to announce their latest combos with the launch of the new 2015 Crush series. Redefining the benchmark for practice amplifiers, the  Crush 12, Crush 20, Crush 20RT and Crush 35RT are primed to introduce guitarists of all levels to the signature Orange sound, whilst offering a genuine alternative to digital modelling.

Building on the success of the critically acclaimed Crush Pro range, Orange has opened up the same high gain, four stage preamp design to the new Crush series, capturing the Dirty channel of their iconic Rockerverb in solid state form. Combined with Orange’s custom Voice of the World TMspeakers, the new Crush deliver gut-punching tones with highly responsive overdrive and levels of detailed saturation never before heard in a practice amplifier.

All models feature Orange’s new CabSim circuit which faithfully emulates the muscle of an Orange 4×12″ cabinet through the headphone/line output, whilst channel switching is available on 20W and 35W models. RT versions feature onboard reverb and an integrated chromatic tuner. The Crush 35RTalso includes a fully buffered low-impedance effects loop and more than enough output for the rehearsal room.

With refined styling, rock-solid build quality and enormous, wide-ranging tones, the new Crush takes players back to the heady, no-nonsense days of straight ahead, ‘plug and play’ analogue amps. 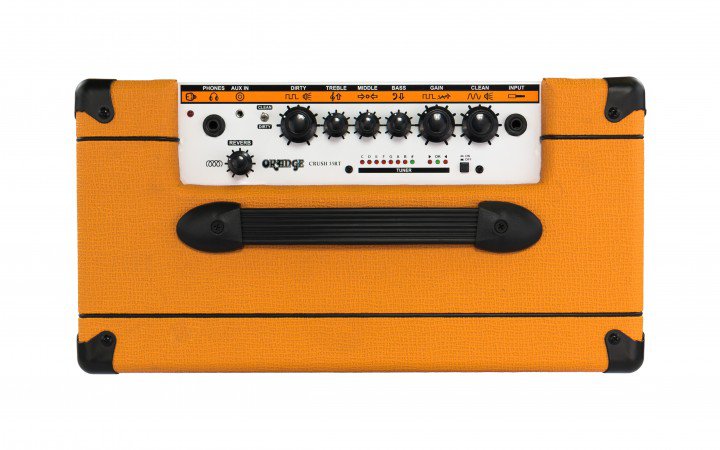 The Crush 12 is the smallest of the full-format Crush models designed for guitarists with a no-nonsense attitude to quality analogue tone. This single channel combo features a powerful 3 band EQ and dedicated Overdrive control for tones ranging from crisp and clean through to vintage Orange grind to match the unmistakable styling.

The Crush 12’s custom 6″ Voice of the World speaker ensures the amp always remains punchy and articulate, despite its tiny dimensions. Our new CabSim-loaded headphone output means huge tones at whisper quiet volume, making this combo an ideal practice partner for players of all levels.

The Crush 20RT builds on the tonal platform of the Crush 20 with even more of functionality through the inclusion of lush onboard reverb and an integrated chromatic tuner. Like its more ‘stripped down’ sibling, the Crush 20RT features footswitchable Clean and Dirty channels plus our new high gain, four stage preamp design, serving up a huge palette of overdriven and distorted sounds, rich in harmonic overtones.

The sheer punch achieved through the Crush 20RT’s custom 8″ Voice of the World speaker is nothing short of staggering, with a commanding delivery and depth of sound that belies amp’s modest footprint. Complete with an Aux In for backing tracks and a CabSim-loaded headphone output, the Crush 20RT is the perfect portable practice amp combo, combining usable features with legendary Orange tone and buckets of classic Orange mojo.

The Crush 35RT is the largest and most feature-laden model in the Crush range. Our new twin channel, high gain preamp coupled to a beefier 35Watt output stage and 10″ Voice of the World speaker yields amazing results, delivering even greater punch, presence and volume. In addition to onboard reverb  and an integrated chromatic tuner, the Crush 35RT also features Aux In for backing tracks and our CabSim-loaded headphone output.

To top it all off, the Crush 35RT is complete with a fully buffered, ultra transparent effects loop to truly get the most from your pedal setup. With features like these and more than enough bite and attitude for the rehearsal space, this combo goes way beyond the call of a traditional practice amplifier.

The twin channel Crush 20 takes an uncompromising approach to guitar tone and puts it in a compact and portable package. With footswitchable Clean and Dirty channels our new high gain, four stage preamp design serves up a huge palette of overdriven and distorted sounds, rich in harmonic overtones.

The sheer punch achieved through the Crush 20’s custom 8″ Voice of the World speaker is nothing short of staggering, with a commanding delivery that belies amp’s modest footprint. Featuring an Aux In for backing tracks and a CabSim-loaded headphone output the Crush 20 is an obvious choice for players seeking the legendary ‘Orange sound’ in a practice amp format.