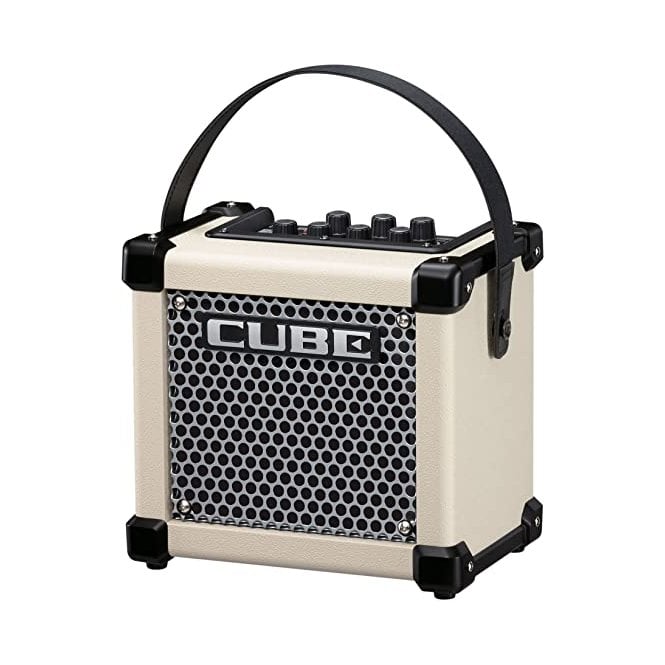 A top-seller worldwide for nearly 10 years running, the MICRO CUBE is the most popular battery-powered amp of all time.
The new MICRO CUBE GX retains the tiny size and huge sound of its legendary predecessor while adding many great additions and improvements, including i-CUBE LINK, increased output power, a chromatic tuner, and a MEMORY function for saving your favourite settings.

A top-seller worldwide for nearly 10 years running, the MICRO CUBE is the most popular battery-powered amp of all time. The new MICRO CUBE GX retains the tiny size and huge sound of its legendary predecessor while adding many great additions and improvements, including i-CUBE LINK, increased output power, a chromatic tuner, and a MEMORY function for saving your favourite settings. The massive, high-gain EXTREME brings the total number of COSM amps to eight, while HEAVY OCTAVE has been added to the onboard effects section for thick, ultra-low tones. i-CUBE LINK opens many new opportunities for practice and recording, providing a built-in audio interface for working with music apps on your iPhone, iPad, or iPod touch.

The MICRO CUBE GX features the same ultra-compact footprint, battery-powered operation, and big tone that made the original MICRO CUBE such a massive hit around the globe. With up to 25 hours of playing time using six NiMH AA-size batteries, you can enjoy uninterrupted fun while jamming at home, at the beach, on camping trips, at parties—wherever! Increased power output delivers even better performance than before, and a chromatic tuner is built in, eliminating the need to carry an external tuner when you play.

Filled with Roland’s renowned COSM amps, the MICRO CUBE GX provides tones for playing any musical style, from ultra-clean jazz to heavy rock and everything in between. The newly added EXTREME amp kicks things up a notch, giving you a massive voice for crushing, in-your-face metal riffs. There’s also a MIC setting for using the amp with a vocal microphone. Five different EFX types are available to sweeten your sound, with a new HEAVY OCTAVE effect that works great for adding unique, ultra-low power to distorted tones. An independent DELAY/REVERB processor is onboard as well, with a newly added spring reverb option for authentic surf and roots-rock sounds.

The new MEMORY function turns the MICRO CUBE GX into a dual-channel amp, greatly increasing its versatility. It couldn’t be simpler to use—just dial up the amp tone and effects you want, hold the MEMORY button for a few seconds, and your settings are saved! After that, you can toggle between the saved setup and the current knob settings with a quick button press. Use it for saving a favourite sound, switching between rhythm and lead tones, or calling up a special sound for a particular song or style.

Onboard the MICRO CUBE GX is Roland’s innovative i-CUBE LINK interface, which lets you integrate with your iPhone, iPad, or iPod touch using a real guitar amp with great tone. Unlike typical bulky and inconvenient iOS guitar interfaces, i-CUBE LINK connects to your device’s audio jack quickly and simply with the included cable, providing two-way communication with your favourite music apps. With i-CUBE LINK, you can play along with music tracks and send studio-quality COSM tones with effects straight into the recording app of your choice. The versatile i-CUBE LINK jack can also be used as a simple stereo input, enabling you to plug in nearly any music player or audio device and play it through the MICRO CUBE GX.

Available for free from the App Store, the Roland CUBE JAM app turns your iOS device into a fun command center for jamming, recording, and learning. Play back commercial songs and minus-one tracks through the MICRO CUBE GX via i-CUBE LINK and riff along for hours with the amp’s great COSM tones. CUBE JAM also records audio through the i-CUBE LINK connection, letting you capture your jams with a single touch. After recording, you can adjust the volume of your guitar and backing music independently in the app, then export your mix to a 16-bit, 44.1 kHz WAV file. CUBE JAM also includes powerful tools for music practice, including independent speed and pitch adjustment of audio playback, Centre Cancel to remove solos and create your own jam tracks, and more.