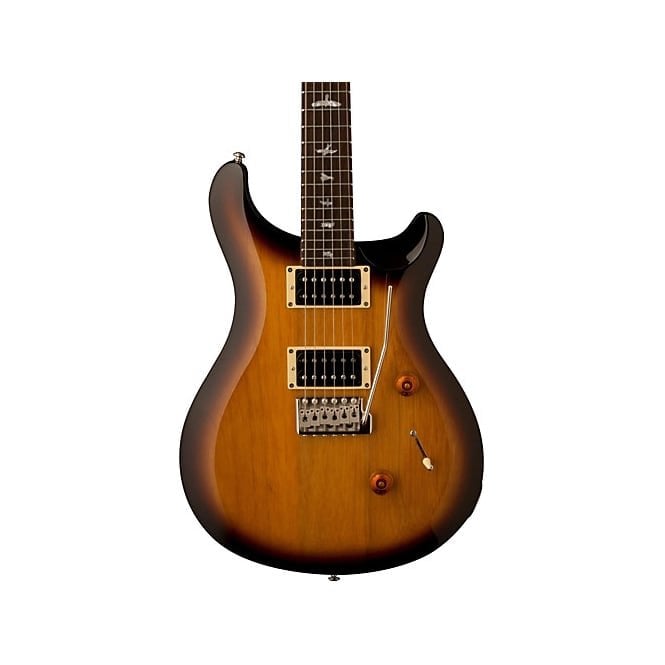 The PRS Custom 24 was the first guitar to be publicly released by Paul Reed Smith back at the 1985 NAMM show. Although the core model may be out of the reach of a lot of peoples pockets the SE line of guitars has always given amazing quality for the money. Now you can get your hands on one for an amazing new low price with the return of the PRS SE Standard line. Designed to be a no nonsense, back to basics guitar that performs and sounds just as crisp and clear as the rest of the range. Coming from Indonesia the PRS SE Standard 24 is everything you need in a guitar and more.

If you have ever played a PRS guitar this one will feel right at home. With it's 25" scale length 24 fret mahogany neck that has been topped off with rosewood and filled in with bird inlays. When you play this guitar this neck will feel like any other PRS Wide Thin neck you have played as it is the same.

Although the body may not have as many curves as its USA made Core line bother the beveled body looks amazing on any stage. You can play this guitar all day and all night thanks to the solid but light weight mahogany body that sounds thick and full while not destroying your back. Every part of this guitar has been carefully crafted so you get the sound and feel you want at a budget that fits you.

Heres were you expect there to be a catch, but there isn't one. In this guitar you will find all of the same high quality hardware that has been on the PRS SE line for years even at this lower price. On the Standard 24 you get a PRS Tremolo, SE versions of the incredible HFS Treble and Vintage Bass humbucking pickups, volume and tone controls, a 3 way pickup selector and a coil tap on the tone control. What else could you need. No matter if you are looking to upgrade from your first guitar or looking for your 30th this guitar still has something to offer.

One of the things that made PRS guitars so popular was their versatility and none of that has been lost with this model. From blues and jazz all the way up to crushing death metal set it up how you like and get to playing. Leave your worries about your guitar behind you as this guitar will carry you through your gig with ease.